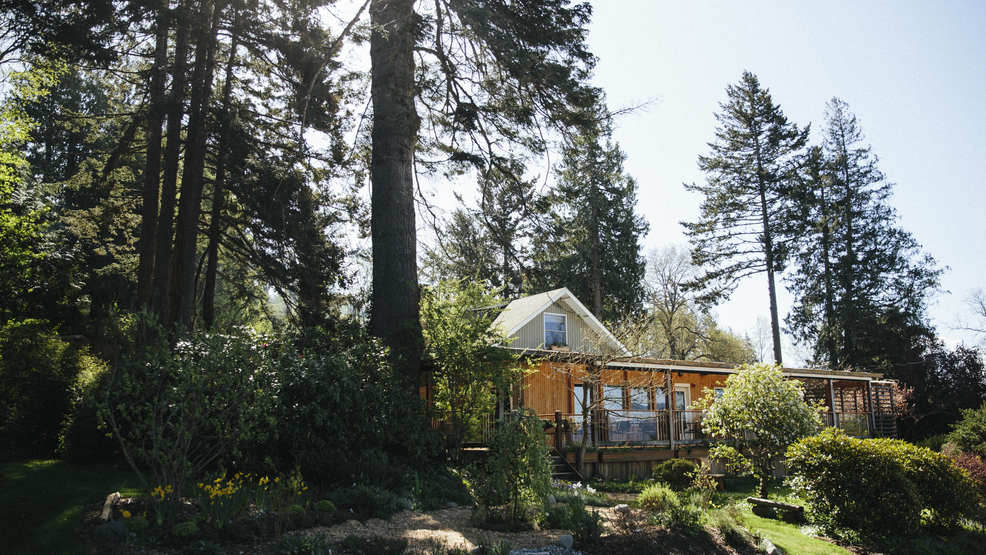 Inside The Willows Inn, One of the Best Restaurants in America

It juts out of the Salish Sea. Craggy, wild, untamed. Lummi Island is accessible only by ferry, a ferry the size of a tugboat.

The year-round population on the island is less than 900. There aren't any stoplights. What you will find is a post office, a grocery store and one of the best restaurants in America, the Willows Inn.

"It's a traditional Pacific Northwest Inn where we just try to make it nice and comfortable for people and then let the dinner menu really wow people," said Reid Johnson, General Manager at the inn.

Dinner here is experiential. A multi-course feast for the senses that attracts diners from all corners of the country and beyond.

Blaine Wetzel is the Head Chef at the Willows. The Olympia-native came to the island from Copenhagen, Denmark where he worked under legendary chef Rene Redzepi at Noma, considered by many to be the best restaurant in the world.

"It captured my imagination the first time coming to (The Willows). What I saw the potential as and what it could be. And it's been amazing to just realize that vision and now chart new territory," said Wetzel.

During his eight years at the helm, Wetzel has been named Food & Wine's Best New Chef and won three James Beard Awards.

He could cook anywhere. He needs to cook here.

"It really is a unique combination of characteristics between the location right on the water, the size of the restaurant, we have our own farm," explains Wetzel.

The Farm
If it doesn't come from Lummi Island, you won't find it on the menu at The Willows. The majority of their seafood comes from a single fisherman. The produce comes from Loganita Farm.

"You can really tell obviously what's on the menu tonight," said Wetzel. "Everything comes from the farm. But you can also see what's on the menu for the rest of this year, for October, December, even into March of next year. We have the ingredients planned now that we'll harvest in the fall and use next spring."

"I have to say it's a really fun challenge in November when Blaine says 'I'd like ten caraflex cabbage a day timed with the tuna harvest in mid-July,'" she said with a laugh. "My brain just goes 'Woo, this is fun.'"

Wetzel consults with von Krusenstiern on a daily basis. She's also responsible for experimenting with new crops. It's a multi-year process, growing different varieties from different seeds, choosing the one that tastes best and has the highest yield, then planting for production.

"You end up with a farm filled with the most unique ingredients, that you really put the time and research in to making sure they perform well and the flavor is just fantastic," said Wetzel. "It wouldn't make sense for us to have this garden and to grow conventional vegetables, or something that we could buy just as easily from a farm down the street. This farm grows only unique ingredients."

The Staff
Teo Crider works behind a small, well-appointed bar near the back of The Willows dining room.

"I spent the better part of today carving these cubes," he explained as he dropped a single, perfectly clear ice cube into a low-ball glass.

Crider runs the bar program at The Willows. It's the only bar on Lummi Island.

"The bar program kind of follows the restaurant philosophy of being ingredient-driven and hyper seasonal," Crider explains. "So it's always changing. We're always making new infusions and different herbs and flowers come through the different seasons just like the menu."

That attention to detail and commitment to excellence can be felt from every member of the staff at The Willows.

"I think what drew me out here was just because it seemed relatively untouched and that was something I was unfamiliar with," said Meredith O'Malley, Restaurant Manager at The Willows. "And just the way we present it, with such honesty, is just pretty amazing."

"It is definitely a team effort here," agrees Wetzel. "And restaurant in general, team sport. And we get chefs from all over."

There are about 20 chefs on staff at The Willows. They come from all over the country, the world, often leaving behind good jobs, successful careers, to take their skills to the next level.

"We really have some of the best and brightest in the industry working here. And they come here for a unique experience and a chance to learn some foods that might not exist anywhere else in the country."

The Meal
Dinner service at The Willows beings at 6 pm. One seating, 34 diners, at least 20 courses.

"The way I like to create a menu for The Willows is firstly just to share," explains Wetzel. "To share with people coming here what's growing on the island. What I've found since I've been here and what these things taste like."

Do do that, he has dishes highlight one ingredient.

"So you really get a chance to taste it if it's something you haven't tried before or it's really unusual," he said.

One a menu that changes daily, each dish has it's own story. Some come together in days or weeks. Others take significantly longer, like the stuffed pine cone desert that was on the menu during our visit.

"The small pine cones [we] collected, and then candied, and then opened up and stuffed with an ice cream made from the pine tips," explains Wetzel. "And that's one that I think we first started working with the green pine cones about two years ago as just an experiment."

It would be easy to call the food at The Willows 'creative' - and it is - but creativity isn't really Wetzel's goal.

"At the core is just a drive for improvement," he explains. "I love the work. It's really a joy to be able to create new dishes and remember ones that maybe I started on last year and pick up this year. That sort of building just makes the restaurant better and better every year and I can say that the menu now is better than it has ever been and [we're] just doing our best work right now."

Blaine Wetzel is a chef, yes, but he's also a storyteller. When he steps into the kitchen at The Willows he's writing a love letter to Lummi. Each dish, each meal is a snapshot of this rugged, beautiful corner of the Pacific Northwest.

"Any given day is a real reflection of what's happening in nature on the island, through my lens, in the form of a tasting menu here at The Willows."