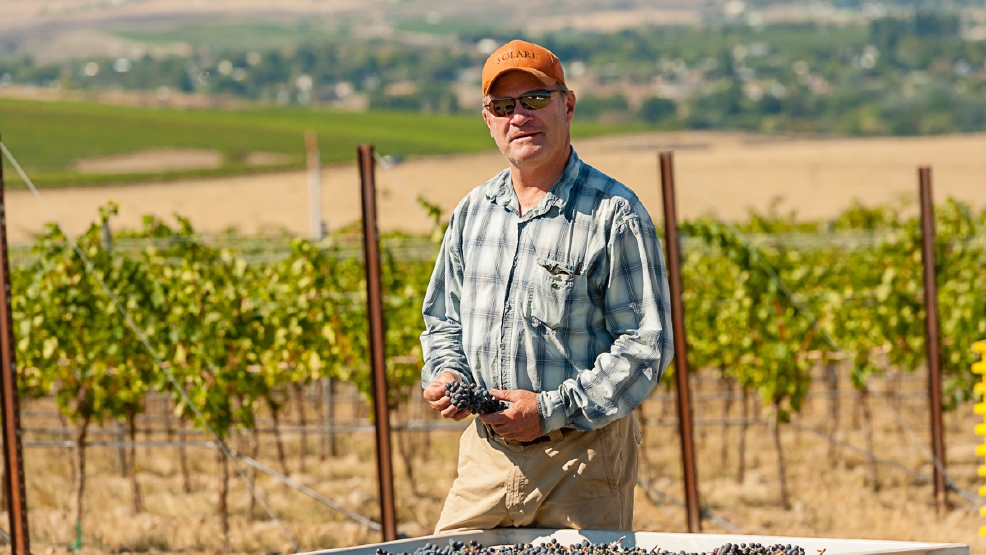 How one grape grower inspired a whole industry

When Dick Boushey decided to plant his first commercial grape vines back in 1980 - three years before the Yakima Valley was recognized as an American Viticultural Area - little did anyone know that that his move would have a profound impact on the then fledgling Washington wine industry.

Boushey's legendary grapes are at the heart of some of Washington's most critically acclaimed wines and some of his viticulture decisions - particularly his focus on growing Rhone varietals such as syrah - have shaped the development of the entire industry in our state. And it's not just his grapes that have been influential. Dick, ably abetted by his wife Luanne, has been a mentor and friend to a whole generation of Washington winemakers.

Washington native Boushey first started work as a banker, before deciding instead to take over his father's Yakima Valley orchards. He first planted cabernet sauvignon and merlot, but soon started experimenting with Rhone varietals and was one of the earliest Washington vineyards to grow the syrah for which he is now renowned. At the time Washington was most famous for its rieslings and other whites, and it was considered groundbreaking to plant syrah and riesling together in the same vineyard. Nowadays he grows 23 different varieties of grape, as well as concord grapes, apples and cherries, and was honored in 2002 by the Washington State Wine Commission as Grower of the Year, winning the same title again in 2007 from Wine & Spirits magazine.

Boushey saw potential in the Washington wine industry all those years ago, but has always underestimated its growth, which he believes have been principally driven by Washington's wonderful soils and growing conditions. 'As I travel and learn about other great growing areas of the world I better appreciate how unique and lucky we are to farm wine grapes in WA'. Boushey considers grapes to be the most challenging yet rewarding crop he has grown. He gets a kick out of adapting to changes in climate and growing conditions and every year tries new approaches and techniques. 'One of my personality quirks is I am never satisfied and I think I can always do something better.' Boushey even learnt how to make wine, so he could understand exactly what winemakers were looking for in their grapes, though none of the wine he makes is sold. Thanks to this perfectionist approach, Boushey's grapes are now some of the most highly sought-after in Washington, 'We are ultimately making wine' he explains, 'so when you pick grapes the journey is just beginning, for the other crops it's the end.'

Winemaker Chris Peterson of Avennia agrees, 'Dick Boushey is truly a wine grower, not just a grower of grapes. He thinks about the vineyard not just in terms of the health and production of the vine, but also in terms of the finished wine. I appreciate how he uses his senses and "feel" for the vine, though he backs it up with a vast wealth of knowledge and experience. '

Industry growth has also been fueled by a unique culture of collaboration and knowledge sharing between growers and winemakers. Boushey has made a conscious decision to work with smaller wineries and winemakers who do not have their own vineyards and wants them to make the greatest possible wines with his fruit. He works closely with them to grow grapes that match the wine style of the winemaker and the winemakers have a big influence on the growing process. As he says, 'In the end we are both dependent on making good wine that will sell'. Peter Devision at EFESTE agrees. ' If something isn't up to quality, he won't put it in your bins, which is why we know that what shows up at the winery is exceptional. Having said that, I can't remember ever walking his vineyards and debating whether we would be dropping anything - it's always brilliant fruit!'

A recent dinner and wine tasting in Boushey's honor at JM Cellars in Woodinville showcased wines from three winemakers - Chris Peterson, Peter Devison and John Bigelow of JM Cellars - who all create single 'Boushey Vineyard' designated wines with his fruit. It was fascinating to taste how uniquely different the wines were, due to the different visions of the winemakers, even though they were all made using Boushey grapes.

Almost more striking, though, was the obvious affection and esteem in which Boushey is held throughout the industry. John Bigelow simply says, 'Dick Boushey has been one of the best people I have met in my 19 years as a winemaker. He is a great wine grower but an even better person'.

Any Boushey Vineyards designated wine is made made from some of the finest grapes in the state of Washington and is the result of a close collaboration between Dick Boushey and the winemaker. Trying different Boushey Vineyards - designated wines makes for a fascinating horizontal tasting. Find these wines at fine wine shops in the state or by visiting the tasting rooms in Woodinville.

JM Cellars creates a Boushey Vineyards Syrah every year, though they are currently sold out of all vintages including the 2013. The next release (2014 Boushey Syrah) will be available in January 2017.