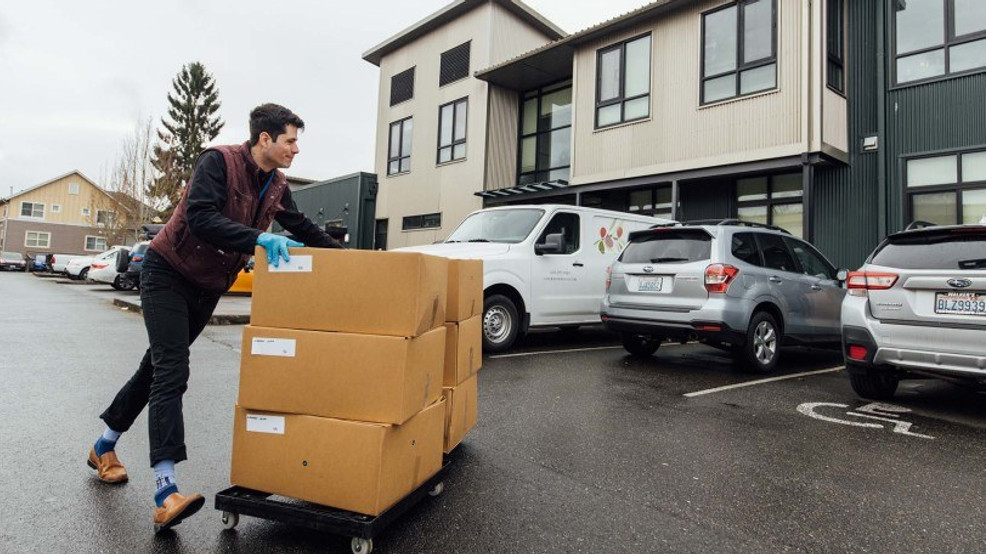 When news broke of the first coronavirus death in Washington State in early March, Gourmondo Catering & Box Lunches lost 25% of its business. Founder and CEO Alissa Leinonen quickly re-forecast; what started as yet another record-breaking year for her company became, instead, a projected loss. The next day, as the slew of cancellations continued, they were down 50% - and by Wednesday, March 4, Gourmondo had lost 80% of its business for 2020.

At that point, closing up shop would have been, in retrospect, the path of least resistance. But if Leinonen was tempted to throw in the towel, she didn't show it. And while many other local business owners decided to close, she and the Gourmondo team resolved to stay open — but only if it meant making a difference.

"I said to my team, 'I'm going to ask everyone to push hard and be creative and be patient and flexible because it's going to be a bumpy road,'" she said. "We made a commitment to keep these doors open, so we're going to do it in the most meaningful way we can."

Since that decision was made, Gourmondo has provided over 250,000 meals to the people who need them the most — like elderly folks who can't leave their homes, frontline healthcare workers, and public school students and their families.

The Seattle School Board closed all public schools on March 12; for thousands of students, that meant no more free breakfast or lunch. Days later, with Amazon as a financial backer and the food-focused nonprofit Farestart as a collaborator, Gourmondo stepped in; right now, they produce around 2,200 meals per day for students and their families.

[Farestart ramps up efforts to provide food for those in need]

"It's been a real scramble to just try and make sure that these children continue to get meals provided to them," Leinonen said. "Many of them are on assisted meal programs, so they really need the support. And Farestart absolutely sets the golden standard for taking care of those in need and feeding those who are struggling with food insecurity."

Farestart isn't Gourmondo's only partner in their pursuit to feed Seattle families. Plenty of local, multigenerational Seattle food wholesalers - like Charlie's Produce, Mondo & Sons Meats, Borracchini Foods Inc, and Merlino Foods - have also jumped at the chance to get involved. And then there are the farmers, who are sending "significant amounts" of fresh produce. It's a labor of love, Leinonen said.

"We wanted these meals to be more than just, 'Hey, here's a sandwich,'" she said. "We wanted to offer an entree, a dessert, a side dish, so that [the recipients] knew they were a big deal. Oftentimes we also include a note in the box with either a thank you or an encouragement. So it's just been a beautiful program."

Most Seattle public school students went "back to school" — virtually, that is — on Sept. 4, with the exception of those students who receive in-person special education services. And as of right now, there's no telling how long classrooms will be kept empty. As the pandemic trudges on, Leinonen continues to emphasize flexibility when it comes to what Gourmondo can offer, to best help her community. She's a fourth generation Seattlite, so for her, it's personal.

One thing is certain: now that Gourmondo has dedicated itself so unreservedly to the community, there will be no return to "normal" post-pandemic (whenever that may be).

"One of the silver linings of this COVID crisis is that I've realized, as a business owner, that it's really important that we continue to do our part and establish a division of the company that focuses on supporting nonprofits," said Leinonen. "In particular, we're looking to have a more permanent, long-standing relationship with Farestart. We want to continue to support them, even past the pandemic. I've got a big company - the infrastructure, the vehicles, the team - and I need to use that to help the city that I love."