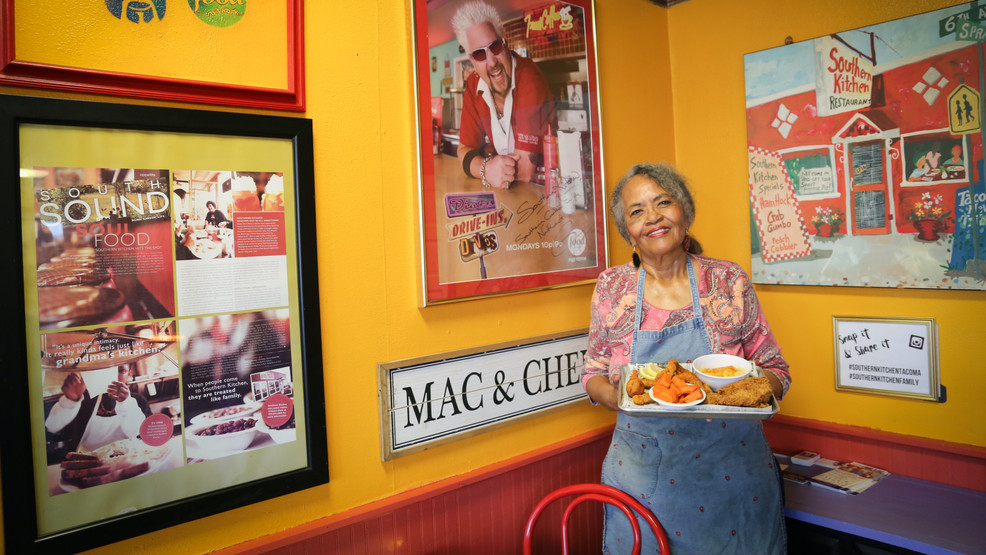 On March 16, Southern Kitchen owner Gloria Martin was preparing to go over coronavirus safety procedures for her upcoming staff meeting. That night, she received a blast text — Gov. Jay Inslee had announced "no dining, effective tomorrow."

Though now Southern Kitchen can technically open their doors to the public, Martin has opted to wait until at least Phase 3 to resume indoor dining out of the safety for their staff and customers. Even with take-out only service, customers continue to be loyal to Southern Kitchen. However, the pandemic has affected Martin's connection with her regulars.

"We don't know who they are anymore with the masks on," said Martin, "I miss my customers and the hugging, I'm a hugger."

For the past 25 years, Martin has been serving up hot comfort food out of Southern Kitchen in Tacoma. Her cornbread stuffing has been featured on the Food Network's "Diners, Drive-ins and Dives," and the restaurant has been listed in many TripAdvisor and Yelp "Best of" Lists.

Before Southern Kitchen and declaring Tacoma her home base, Martin lived all over the country. She was raised in a small town in Massachusetts, west of Boston. After attending Hampton University, an HBCU, she lived and worked in DC, Baltimore, Chicago, and finally, Tacoma.

In the mid-1970s, she worked at the Washington Post just a few blocks away from the White House. One Christmas, a coworker's gift planted a seed in her mind.

"One of my coworkers gave me a calendar about Mt. Rainier National Park. One day, I was sitting in my office, flipping through the calendar and thinking, 'That's where I want to live,'" said Martin, "40 years ago I daydreamed about Mt. Rainier, and when I finally got here, I couldn't believe it. I felt at home for some reason."

Once she made the move to Washington, Martin ran a bookstore specializing in art and diversity with her ex-husband. Cooking is an art to Martin, and at the store, she sold a lot of cookbooks from local churches.

"I knew a lot of the history of Southern food, I used to read cookbooks like a novel, who does that?" she said.

Her father was an Army chef. From a young age, he taught her the rudiments of cooking. From him, she learned basics like how to cut a chicken, the many uses of good stock and, her favorite, how to make biscuits and gravy, which she serves daily at Southern Kitchen. The dish is a southern staple and, she said, "it's that most simplistic thing to make." Her dad's old-school methods have stuck around in the kitchen. From the slow-cooked red beans to the cornbread dressing made up of house-made cornbread, Martin reiterates that they are not a fast-food restaurant.

98% of the menu is made in-house. Their ingredients are local; they exclusively use Tillamook cheese in dishes like their hearty mac and cheese and chicken from Draper Valley Farms in Mount Vernon. And all the locals and not-so-locals know about their house fried chicken. Martin often preaches that southern food is America's original cuisine.

Southern Kitchen's delicious menu has remained the same over the years, but Martin jokes that the cliché fits; "I haven't changed a thing, if it's not broke, why fix it?" However, with the recent extra time at home, Martin plans to add a vegetarian option to the menu and develop her own red-bean patty.

At the beginning of the pandemic, take-out business was slow as expected. Fortunately, Martin had delivery platforms like Doordash, Uber Eats, GrubHub and Postmates ready to go. She was hesitant to roll them out pre-COVID because they take such a big percentage of revenue, but now they are an essential part of the business as customers started ordering southern classics once again. Martin expresses the community has been overwhelmingly supportive; one customer gave Southern Kitchen a portion of their stimulus check, while a local credit union gave the restaurant a gift card.

She said the pandemic deeply changed the restaurant industry for the customers and workers. In the wake of everything, the Southern Kitchen crew continues to be the restaurant's backbone.

"My staff has been amazing, I don't have a single person who has called in sick, everyone keeps coming in and doing the work," said Martin.

She's grateful for her crew — and her longtime staff she calls her anchors — and hopeful that eventually, she'll be able to welcome her customers back inside safely and maybe even hug them once again.