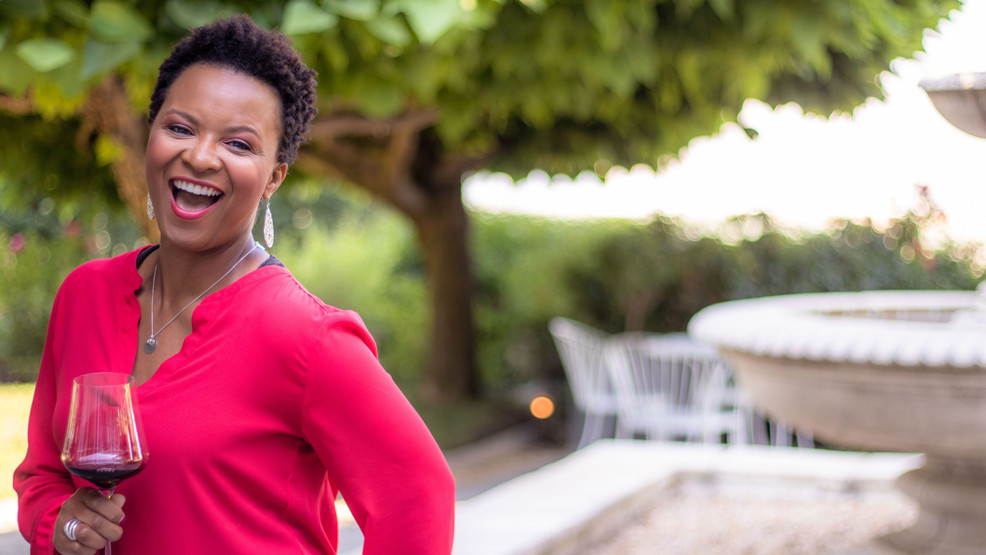 Good wine, like good art and good adventures, should give you goosebumps. A bottle of good wine, after all, is both art and adventure — just ask Shae Frichette. The co-founder of Frichette Winery with her husband Greg - Shae entered wine on a whim. Now, Washington's only Black female winery owner is using her success and insight to empower and encourage more female and Black winemakers.

Shae and Greg met while living in Los Angeles. After they decided to have a child, the couple opted to move closer to home — but for Greg, that meant the Tri-Cities, and for Shae, that meant South Carolina. They left the decision to fate: a coin flip lead them to the Pacific Northwest.

"We said if we're going to move to the Tri-Cities, we'll do something that gives us goosebumps, and we landed in wine," said Shae.

Neither Shae — who had grown up in a dry home — nor Greg had a background in wine beyond a fondness for it, but passion and belief in their ability to transform an idea into a thriving business brought them to Red Mountain, Washington. When they arrived, though, opportunity wasn't waiting. So Shae and Greg created it.

"We knocked on doors because there was nothing for sale, and the folks who owned this place said no four times before saying yes," Shae said. "We knocked on the right door at the right time." (Frichette's soon-to-be-released 2018 Punctual, a Cabernet Franc with a little Cabernet Sauvignon, is an homage to the power of good timing).

That same tenacity drove the Frichette's approach to business: they sought out mentors, took classes, learned how to ferment and what types of equipment were needed to achieve the style they had in mind.

"You don't stop learning. To really craft what we're doing, being open to learning and growing is one of the best gifts that we can give ourselves," she said.

In 2011, Frichette offered its first vintage with 650 cases of wine, and the tasting room opened in 2013. Since then, Shae and Greg have increased production to 2,000 cases, with plans to continue to expand. The work is a labor of love and creativity, from harvesting the grapes, to crafting unique blends to forging collaborative relationships with the winegrowers.

"I really want to make these folks proud and want to have a product that they taste and they're like, 'Oh yeah, that's from our vineyard," Shae said, adding that she and the growers have conversations about the grapes and the best times to harvest to achieve the wines she wants to make. "That gives me goosebumps when I get to walk the vineyards and know that it's a two-way dialogue."

Shae has also cemented herself as a leader within the community, mentoring middle school girls, and creating a support system among others in the industry.

"I started a sharing best practices group with the tasting room managers in my area, so about a dozen of us get together every month and are resources to each other. That was something I really needed when we first opened our winery," Shae said.

A few years ago, Shae sought inspiration and a change of scenery— imagining, perhaps, a yoga retreat — but instead stumbled upon a Black Woman in Wine event in Miami, held by Marcia Jones of Urban Connoisseurs. The organization aims to support and create more opportunities for women of color in the wine industry. Shae booked a ticket to Florida.

"I saw Black women who were making wine and who owned wine brands. I had never really seen that before. That really lit the fire in me, and that's why I created the brand Sashay. I saw these women in leadership roles in the production facility, and I just never really saw myself in that role until I saw them. That's what really challenged and pushed me."

Sashay, Frichette's second label, was born in the time it takes to fly from Miami to Washington: by the time the wheels landed on the ground, Shae had a name, a label and a taste in mind. And a purpose: to remind women that they are strong, courageous and fierce.

Sashay Wines was launched in 2017. Bottles feature art designed by Tri-Cities-based artist Chance Watt. If the labels evoke a Beyoncé-esque spirit, it's in service of Shae's mission of empowering women, whether they are wine lovers or aspire to make wine themselves — but might not know there's space for them.

"It's probably like other industries. You have the image of who's there and who belongs," Shae said. "I think the more that we see and the more visibility that Black women in wine get, I think that will inspire other women to get into it."

The Black Woman in Wine event — which Shae now hopes to bring to Washington — and her experience as a Black woman in the industry, and one of the few in Washington's wine scene, underscored how important it was to show that there was room for new faces and new ideas at the table.