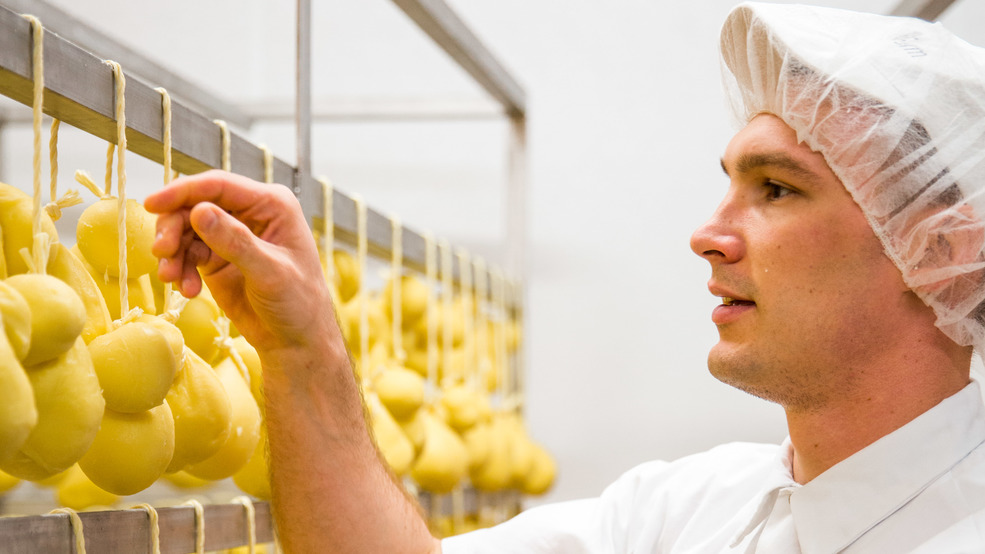 Dairying is nothing new to Daniel Wavrin, co-founder and cheesemaker at Ferndale Farmstead. Daniel was raised on his three-generation family dairy in Eastern Washington. His father, Bill, a veterinarian, and uncle, Sid, an agronomist, started the dairy farm in 1990. In 2009, the Wavrin Family purchased a dairy in Ferndale to expand their business on the west side of the state.

"My dad and uncle are perfect business partners," stated Daniel. "Their backgrounds in agronomy and veterinary fields give our farm the perfect foundation. Nutritious feed and healthy cows are vital to a successful farm."

Growing up, Daniel enjoyed working on the farm with his family, especially in the fields and knew he wanted to return to the farm in some capacity after going to school. His father encouraged Daniel to go to school and bring something 'new' back to the farm. In 2010, Daniel was off to California Polytechnic University to study Agricultural Systems Management. Shortly after starting school, Daniel found his interest outside of the classroom while striking up a conversation with a local cheesemaker at a farmer's market.

"I was hooked," Daniel explained. "I became so interested in the actual process of making cheese that I bought seven books on cheese making. My favorite was American Farmstead Cheese. It was very technical but explained everything in an understandable way. That's when the lightbulb went on."

Daniel set out on a "cheese-venture," camping out along the California coast and visiting cheesemakers to learn more.

"It was such a refreshing industry," he said. "The people were great and so welcoming. I knew this is what I wanted to do."

Daniel proposed the idea of cheese making to his dad and uncle and they were immediately on board. Although it would be a large investment, they saw it as a value-added element to the farm.

"My favorite part of all of this is being able to carry on my family's tradition. I've had so many great mentors who were instrumental in growing my passion for what I do."

After visiting more than 40 creameries throughout the U.S., Daniel landed an internship at Mt. Townsend Creamery in Port Townsend, WA to get hands-on experience in cheese making and learn the ins and outs of the business.

About a year later, in 2013, he started the permit process for his own creamery on their Ferndale farm.

During the two-year construction phase, Daniel was busy working on the farm to fully immerse himself in the backside of the business.

Daniel and his crew were also deciding on the flavors and kinds of cheese they were planning to make. Initially, the Wavrin's considered bleu, swiss, and some other traditional flavors, but were keen on doing something different.

One of their construction consultants had put Daniel in contact with an Italian cheesemaker, Raffaele Mascolo who grew up in Naples, but was working in Wisconsin. Raffaele came out to visit the farm and fell in love with the closed loop system of the farm. Thanks to Raffaele's Italian background and guidance, the Wavrin's decided to venture into the Italian cheese market.

In June of 2015, the creamery started production and has been thriving ever since. From aged Fontina to Fior DI Latte and Provolone, Ferndale Farmstead is bringing authentic, quality Italian flavors to the Pacific Northwest. Recently, they received awards from the American Cheese Society for their Caciotta, Scamorza, and Asiago Pressa.

"This was a really proud moment for us. All our hard work is paying off and our passion for cheese is coming out through the flavors."

Daniel gives their 650 cows a lot of the credit for their quality cheese. Their cows are a mix of Holstein, Jersey, Scandinavian Red, and Motbeliarde breeds.

"These breeds produce the perfect combination of milk for our cheese," Daniel stated as he walked through his quiet and peaceful barn. "We want them to feel comfortable and at ease. Our success goes to these girls and we treat them with the utmost care. We'd be nothing without them.

I grew up in a Darigold family," he said. "Every piece of food I ate growing up, all the clothes on my back, I owe to Darigold. I have so much pride when I walk into the store and see Darigold's products next to my cheese.

Daniel relates his successful business to ingredients in cheese.

"There are four ingredients in cheese—milk, salt, enzymes, and bacterial cultures," Daniel stated. "There are four 'ingredients' to our successful business—fresh milk since we're on the farm, our unique transport method from the parlor to creamery which uses less pumping, our authentic Italian profile, and of course, our amazing crew. I'd put my employees up against any other creamery out there."

Ferndale Farmstead's cheese can be found in Costco, Fred Meyer, Safeway, Whole Foods, and PCC, as well as New Seasons in Portland. Pizzazza in Bellingham uses Ferndale Farmstead on all their pies, too.

For Daniel, it all comes down to passion.

"My favorite part of all of this is being able to carry on my family's tradition. I've had so many great mentors who were instrumental in growing my passion for what I do," concluded Daniel. "Not a lot of people have someone to look up to or get an opportunity like this, but I have both."

Washington dairy is a staple of the state's vibrant food culture and culinary scene. Learn more about the Dairy Farmers of Washington at https://wadairy.org.