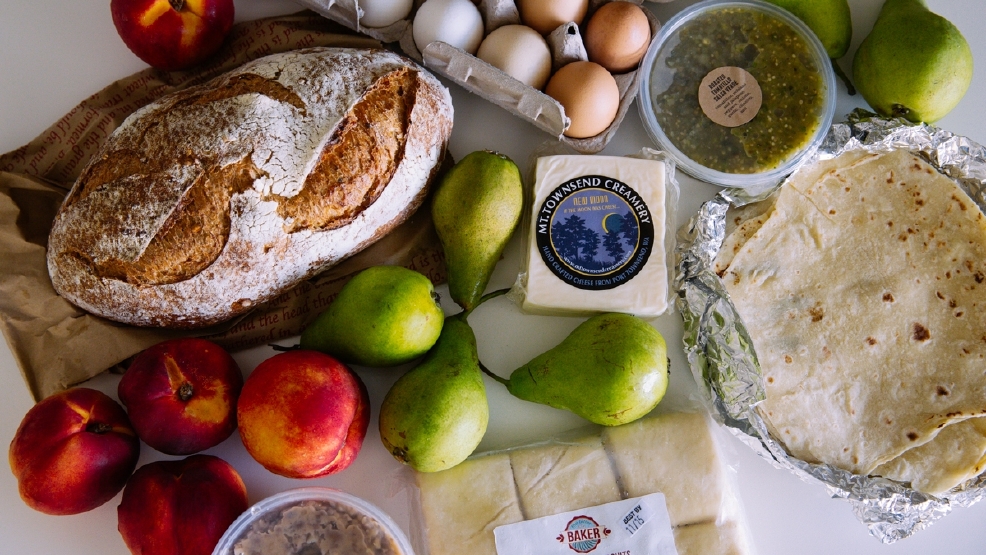 Eating local on a budget - it can be done

September is Eat Local Month. Seattleites like to think of themselves as conscientious shoppers and diners, but what actually goes into eating locally, why does it matter, and what does it really cost? I wanted to find out.

That effort came to a screeching halt when I realized how absurdly expensive and time-consuming it is to eat locally. When I visited a farmers market on the weekend I ended up with a random combination of snacks and fruits and vegetables, none of which made a cohesive meal. I ended up eating a lot of cheese plates and kale, and my week required an extra trip to QFC to pick up stuff I actually knew how to cook. Assembling the pile of ingredients I needed at the grocery store was just easier and cheaper. Eating local was too hard.

Enter Acme Farms + Kitchen. Founded in 2011 by Cara Piscitello and Joy Rubey, Acme aims to make local groceries easy, convenient, and affordable - so much so that you can make dinner (and leftovers) for a family of four for under $100 a week and without visiting a grocery store.

Piscitello and Rubey met when their daughters started preschool - both architects, they found it tough to put together healthy meals for their families as working moms who didn't have time to hunt around a farmer's market a few times a week.

"We figured, okay, we're busy moms who want to feed our kids good food, and we can't spend a ton of time gathering that food," Rubey explains. "There have to be other moms like us."

In June 2011 they launched their website, which originally allowed customers to shop a la carte for groceries the same way they would at a farmer's market - when the pair noticed that people weren't shopping for groceries, though, they changed their business plan. "We always talked about three different kinds of cooks," Rubey says. "You could buy raw ingredients, you could buy something to put together in a kit, and you could buy something that was already prepared." They launched meal kits ("Our first one was smoked salmon pasta and peas in a cream sauce," Piscitello says.) and customers bought every last one of them.

As customers continued buying more and more meal kits, Piscitello and Rubey started selling them in packs, which eventually became the Locavore Box ($100), the heart of the business today. Each box is a collection of three to five complete dinners - they come packed with all the ingredients you'll need to make a meal (aside from pantry items like salt, pepper, oil, and chicken broth), along with instructions.

They've since grown to 300 customers, split evenly between Seattle and Whatcom County. Customers place their orders by Monday morning for boxes that arrive Thursday afternoon ("It's packed and delivered between 2 and 5, so we try for a time where with an ice pack it can sit just fine until you get home from work," Rubey explains). Kits for salads, one-off meals and gluten-free eaters are also available, all using produce sourced locally.

Nearly all the products included come from Washington, and in the winter when produce gets harder to find the team turns to a CSA distributor in Oregon to supplement the ingredients. ("Last year we basically bought all the potatoes in Whatcom county," Piscitello explains.)

And it's not just moms ordering anymore.

"We have one lady who's 70 or 80, and she's ordered a box every week for three years," Piscitello says. "She uses it to invite friends over, but she makes it last. "

"For a single person there's a learning curve," Rubey adds. "It takes some time to understand how you want to order. You can get a salad kit ($36) and use if for lunches and them maybe I'd get a small Locavore Box ($75) once a week."

"The demographic is everyone," she adds. "It's people who spend their entire budget with us or people whose budget is eight times what they spend with us. We deliver to trailers, apartments, high-rises, and huge homes. It's just people who value their time and value what they're eating. People appreciate having this done for them because it saves them time and money."


Tomorrow, find out what Acme actually sent me in the box, what I made with it, and whether it's worth the price.