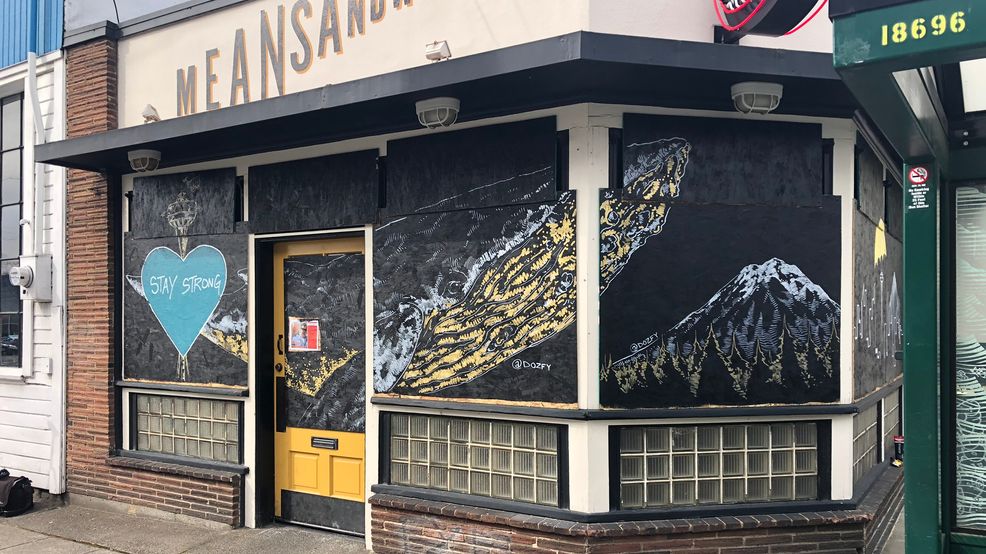 While his work is synonymous with many of Seattle's most acclaimed restaurants, Patrick Nguyen – better known as the artist Dozfy — first began his relationship with the hospitality industry several years ago, drawing on menus in his hometown of Atlanta.

"When I did that first menu art at Leon's in Atlanta, I drew it and gave it to the restaurant as a gift, since I have so many friends in the restaurant industry," said Nguyen. "I come back months later and see they'd hung it on the kitchen refrigerator. It's like 'Oh, you like it?' They're like 'Yeah. We love it'."

When his wife's career brought Nguyen to Seattle, he was welcomed warmly by chefs throughout the city. While the menu art helped to create those relationships, Nguyen is known just as much for his live art experiences and murals; He's worked with the likes of Shota Nakajima at Adana, Mutsuko Soma at Kamonegi and James Beard Award-winner Edouardo Jordan at Salare, where he is the resident chalk artist.

"The art is a vehicle to tell a story," explained Nguyen. "Then the emotional aspect of it because being an artist, having struggled and having worked on my craft to create artwork, that's the whole idea - what is the deeper meaning? How do I translate that story and emotion into a visual language?"

Now, in a time of increasing hardship and uncertainty for the local restaurant industry, Nguyen is using his art to tell a new story. When someone used spray paint on the boards covering the windows outside Belltown Pizza, owner Brian Lee came up with a plan to turn that plywood into a canvas. He put out a call for artists, and Nguyen — Dozfy — was among those who answered the call.

"It goes back to that story. That board came out of necessity to protect something [the restaurant owner] loves while we're in a dire time," he said. "Let's use those boards to also send a positive message."

"I understand Seattle is an icon, so the Space Needle just fits," he said. "The heart is a play on multiple things. Then using green because we're the Emerald City. So the image just came out, but it also represented something even more because I tend to focus my art on being something very simplistic in terms of an image. Make it iconic. The Space Needle is the perfect iconic image, but if you look at it, sometimes it acts like a lighthouse, like a beacon to say 'Hey, stay strong Seattle.'"

Of course, he didn't stop with one mural. Now that image adorns the exteriors of restaurants and bars from Capitol Hill to Ballard. Its message is universal to all those who pause, even briefly, to take a close look.

"Hope. I mean - as simple as that, hope," said Nguyen. "The reason we chose 'stay strong' is we understand everyone is going through something, but there's different nuances to it, whether it be financial implications, medical, health implications. But, we're all suffering in some way, some form, because we're trying to do something for the greater good of everyone."

Though Nguyen's friends, chefs and restauranteurs, are struggling to stay afloat. Though the electricity normally emanating from the windows of their restaurants has been temporarily replaced by beautifully painted boards, their spirit, like the spirit, the resolve of this city remains strong.

"You don't go into the restaurant industry and not come out of it being stronger than ever, because literally every day there's another obstacle they have to face," said Nguyen. "This obstacle is on a way larger scale that affects everyone. We're all in it together, and hopefully, this art just cements that. It's the cherry on top of saying 'we'll get through this together, we'll figure out a way to get through it, you're not alone.'"

We got this, Seattle!