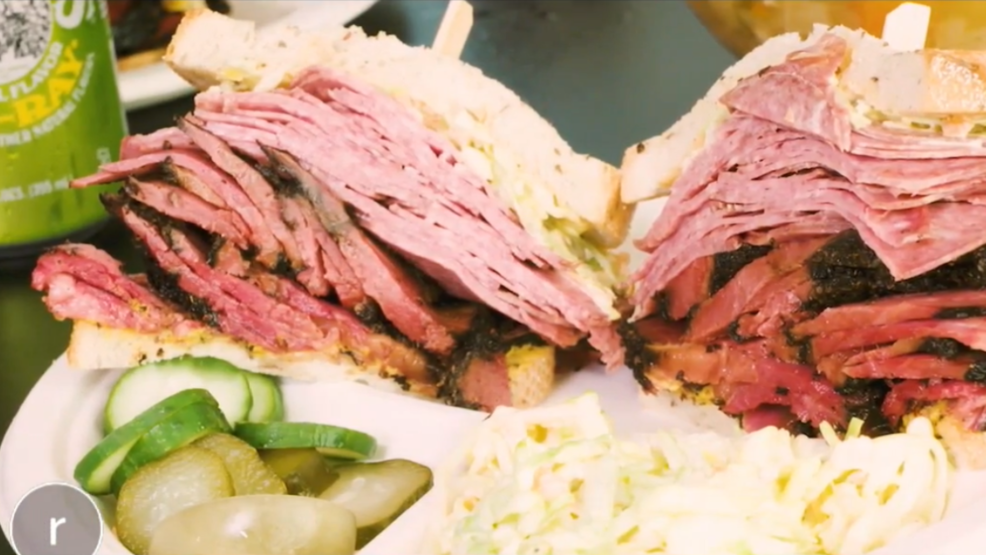 Before you can even see it, you smell it. It's intoxicating, almost magnetic, transporting you to another place and another time.

"What we do here is provide memories. We take people back. When they eat our food they think of a time that they ate things that comforted them," said Vance Dingfelder, owner of Dingfelder's Delicatessen.

At Dingfelder's, located on a bustling corner in Capitol Hill, Vance and his wife, Stephanie, are serving the staples they grew up with in New York City. Matzo ball soup, latkes, whitefish and, of course, sandwiches piled high with pastrami, corned beef and brisket. Everything is made in-house using the highest quality ingredients.

"We're making scratch food the old world way so that Seattleites and people from out of town have a place to congregate and enjoy Jewish delicatessen," explained Vance. "We're going through approximately 100 pounds of pastrami a day and 58-75 [pounds] of corned beef...and if you figured each sandwich is 10 ounces, we're making a lot of sandwiches."

It's best to think of these sandwiches as a full meal. They're massive in the best possible way, just like you'd find on the Lower East Side of Manhattan.

"I'm the one walking around the kitchen going 'make them fat', 'make the sandwiches fat'. We want the people to have to open their mouths really wide," said Vance with a laugh.

All the meat sandwiches at Dingfelder's are garnished with deli mustard, Russian dressing and housemade coleslaw. The meat is cut in an artisan fashion, an old world tradition as Vance describes it.

"It's all about the meat," explained Vance. "Having the meat, having good bread. Those are the two components I think are most important. When you add a schmear of chopped liver to the sandwich that takes it to another level."

My advice? Get the full-size sandwich, and if you can't finish it, take the leftovers. But, if you're looking for something a little more manageable Dingfelder's can make any of its sandwiches 'Seattle Style'.

"That's half the meat that we offer for $12. It's a nice item that you can get with a soup or a potato pancake," Vance told me.

Dingfelder's could soon be growing. Vance and Stephanie have big plans for their current space, turning it into an Eataly for Jewish food.

For Vance, this delicatessen is decidedly personal, rooted in childhood memories of food and family.

"I've been cooking since I was seven years old in my father's restaurant. The love for cooking came from my grandparents and my grandmothers who made these wonderful meals as a kid growing up. That was my passion and that's where I got the passion to cook."

It's more than passion, for Vance and Stephanie it's love. Love for the tradition, love for the customers and love for the food. That love reciprocated every time someone tries Dingfelder's for the first time.