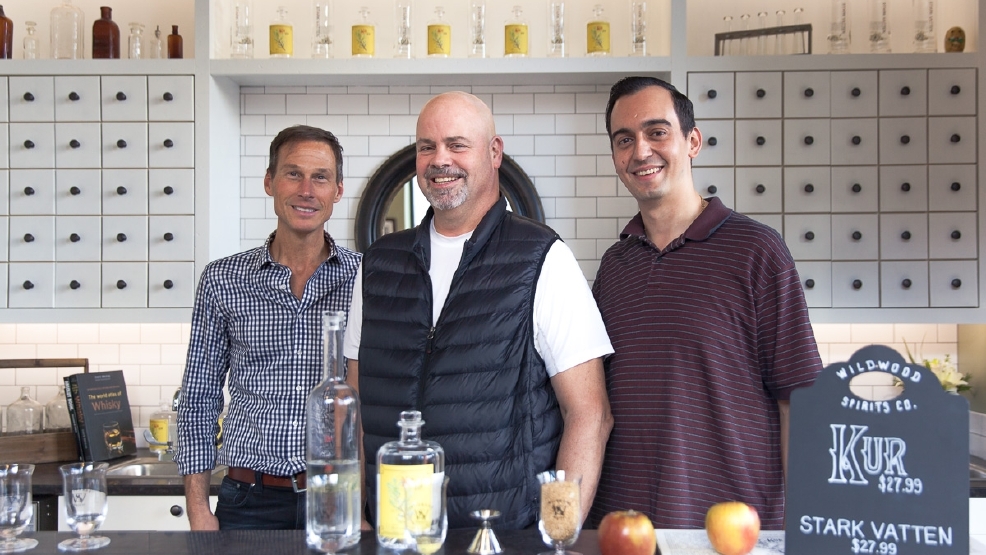 Just in time for the holidays, Chef John Howie, owner of some of the best restaurants in the Seattle area and star of Seattle Refined's 67 Cent Challenge, has finally realized a long held dream. Together with Erik Liedholm, his wine director and head distiller, he has opened the Wildwood Spirits distillery to create unique and distinctive 'grain to glass' artisanal spirits, focusing initially on Liedholm's award-winning Stark Vatten vodka and Kur (pronounced 'cure') gin.


After detailed negotiations with the city, this stunning distillery and tasting room will be the first craft distillery to open in Bothell, on the same block as Howie's beautiful and bustling Beardslee Public House.


The charming light-filled tasting room has been styled to look like an early 20th century English apothecary, with beautiful millwork, white subway tile and medicine bottles. A glass door offers a glimpse through to the spectacular distillery where the gleaming newly-imported copper stills and complex tubing make it look like a mad scientist's lair.


John and Erik have been working towards this moment for years. Recognizing that a superb palate, honed over his years as an award-winning sommelier, was not quite enough on its own to master the intricacies of the distilling process, Erik studied first at the Institute of Brewing and Distilling in London and then with master distiller Dr. Kris Berglund of Michigan State University's craft distilling program.


Under Kris Berglund's guidance, Erik developed Wildwood's Stark Vatten vodka and Kur gin, using almost 100% Washington ingredients, which were then shipped to Michigan for distillation. First released in August 2014, the spirits are now being crafted and bottled for the first time here in Washington, using similar copper stills from German manufacturer Christian Carl to those used initially in Michigan. Erik is assisted by Mike Taib, previously an award-winning bartender at the John Howie Group, who will also be managing the tasting room.


Stark Vatten (the name means 'strong water') vodka is produced from 100% Washington red winter wheat grown in the Tri-Cities area. Erik's aim is to create a totally odorless and tasteless spirit to form the perfect base for cocktails and also for his Kur gin (gin is merely the world's first flavored vodka). Erik uses only spirit from the 'heart' of the distillation to create a vodka of exceptional body and smoothness.


With many artisanal gins, the botanicals are infused into the base spirit in a single distillation. With Kur, Erik distills each of the different botanicals - including juniper, Douglas fir, Seville oranges and Braeburn apples from Erik's backyard - to create separate flavored vodkas or 'fractions' which are then blended precisely to create the finished gin. This allows Erik to use botanicals, such as the oranges, which have only a short seasonal window of availability. The finished result is a very smooth, intensely aromatic juniper-forward London Dry style gin with notes of citrus and apples, which won Best Gin in the 2014 NY World Wine and Spirits Competition and was crowned Best Washington Gin at the 2014 Seattle Ginvitational.


The first vodkas and gins distilled in Bothell are now available to taste and purchase. Apparently Erik Liedholm had tears in his eyes when he tasted these first fully Washington-made gins, the fruits of so many years of study and preparation. 'We are thrilled to be open and to be part of the Bothell community and hope everyone enjoys our spirits with as much joy and passion as we have in making them.'


They'll certainly make amazingly good gifts for the gin aficionados and cocktail fiends in your life, and a visit to the distillery might be just the pick-me-up you need to get you through the next few weeks of festivities.


The Wildwood Spirits tasting room is open Wednesday through Sunday from noon until 5pm and will offer complimentary 1/2 ounce pours of Wildwood's Stark Vatten vodka and Kur gin. Private tours of the distillery are available by appointment.