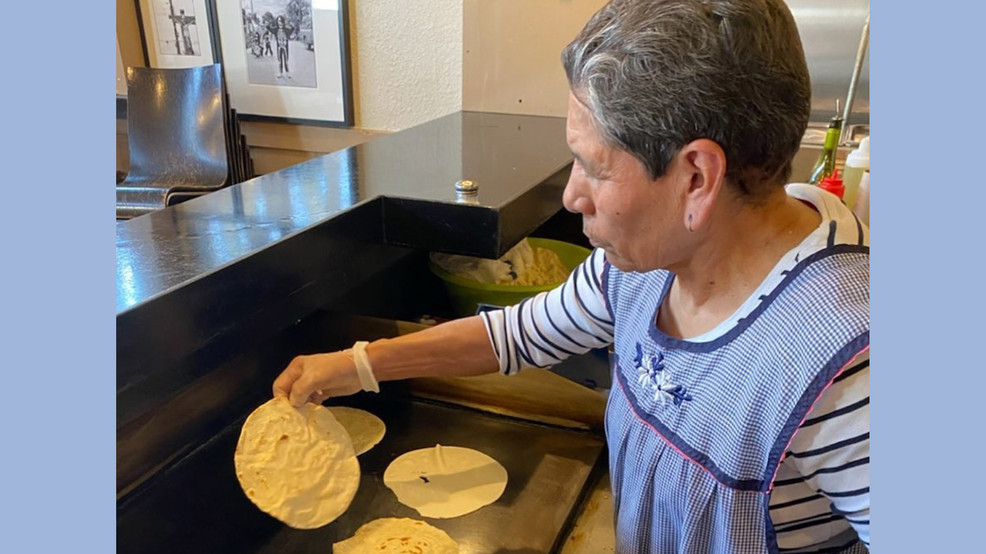 You can't discuss the Mexican foodscape in Seattle without bringing up La Carta De Oaxaca. The Oaxacan eatery has been around since 2003, serving heaping platters of the most authentic (and stellar!) mole and tlayudas (Mexican pizza) that Seattle has seen.

At this family-owned gem, it is the women who run the show. Three generations of the Dominguez women have been upholding their legacy through their delectable food. They've been dishing up Oaxacan classics for almost two decades now. At the helm of it all, Chef Gloria Perez, a culinary doyenne and proud matriarch cooks the delicacies of her childhood for Seattleites. She upholds and teaches time-honored recipes and traditional foods of her culture to her daughter Susanna and granddaughter Karina.

To say the Dominguez family is close-knit is an understatement. They are a family that eats, works, and cooks together.

"I'm very family-oriented," said Perez. "I love being in touch with all my children and grandchildren. I'm also very close with my siblings. I didn't get an interest in food until later in life with the support and motivation from my kids."

The old adage must indeed be true that adversity is preparation for greatness.

"My childhood was very sad, we were very poor. My parents, 7 siblings, and I all lived in a very small house in Oaxaca," she said. "I do, however, remember good food being a constant. The first dish that I learned how to cook was mole and after that was chile rellenos."

Perez is credited with bringing authentic Oaxacan food to Seattle, which had only ever known Tex-Mex versions of the vibrant cuisine before. Think tamales wrapped in banana leaves instead of corn husks, tyaludas topped with stringy quesillo (a kind of Oaxacan cheese), and Mole Negro Oaxaqueno with all its smokey, chocolatey, complex flavors.

"La Carta de Oaxaca started in 2003 when an opportunity presented itself, and we took it. We had no idea what we were getting ourselves into, but we did it as a family, and we are still around," said Perez.

Cooking for Perez is not just second nature but also a part of her identity, an expression of her cultural roots.

What singles Perez's cooking apart from other Mexican establishments is the rustic, indigenous flavor she infuses her food with. Perez is old-school when it comes to cooking from scratch. In her kitchen, each handmade corn tortilla is made fresh to order. They make their chips fresh to order too. There are no bottles, bags or containers in there - the salsas, hot sauces and the guacamole are also made in-house.

If the dishes smack of homely goodness and familial warmth, that's because Perez puts in a lot of love in her cooking. The kitchen is her home turf and a place where she spends many hours on her feet. In there, Perez means business. She does most of the cooking herself, which is no mean feat. You'll find her in the kitchen donning a stiff apron and frying up poblano peppers to golden-crisp perfection, or simmering a pot of pork stew.

"At La Carta, my cooking is as close as I can get to the way food is prepared in Oaxaca. I've tried my best since the beginning to make it as authentic as possible. I try to get as many ingredients as I can directly from Oaxaca — our mole being one of them. To this very day, our biggest thing at the restaurant is consistency."

The pandemic has been a huge challenge, to say the least.

"It's been very weird since March. We've tried to adapt to all the new guidelines as they come. Though we can't operate at full capacity and the cold weather is coming, we've been very fortunate to still have our regulars come by for their weekly margaritas and tacos," said Perez.

Seattle has seen a culinary boom in the last decade, and Perez has witnessed it first-hand. She has seen the Ballard neighborhood change through the years.

"We've seen a lot of businesses come and go. In 2003, there wasn't as much foot traffic as there is now, with just a handful of restaurants and bars. The neighborhood was really laid back then, and now there's something going on on every block."

Even with so many newcomer bars and trendy eateries, La Carta has withstood the test of time. When happy hour hits, you might come here for the Mezcal (they carry a whopping 40 varieties!), but you'll stay for the molote.

"A lot of the food from Oaxaca is finger food like the molote or tlayuda (Oaxacan pizza), and it's very uncommon for someone to use silverware. Oaxacan food isn't very spicy, but it is super rich in flavor," said Perez.

The one thing Perez wishes people knew about Oaxacan food? "The most difficult part about running an Oaxacan kitchen is that sometimes people don't know good-quality, authentic Mexican food— they order their food thinking it's going to be Tex-Mex style."

La Carta de Oaxaca is open from 12pm-9pm, Monday-Saturday for pick-up/take-out. There is also limited outdoor seating, first come first served. Looking to support more small businesses like La Carta de Oaxaca? We're proud to collaborate with Intentionalist, an online guide that makes it easier for you to find/connect with diverse local businesses owned by women, people of color, veterans, members of the LGBTQ community, and people with disabilities.