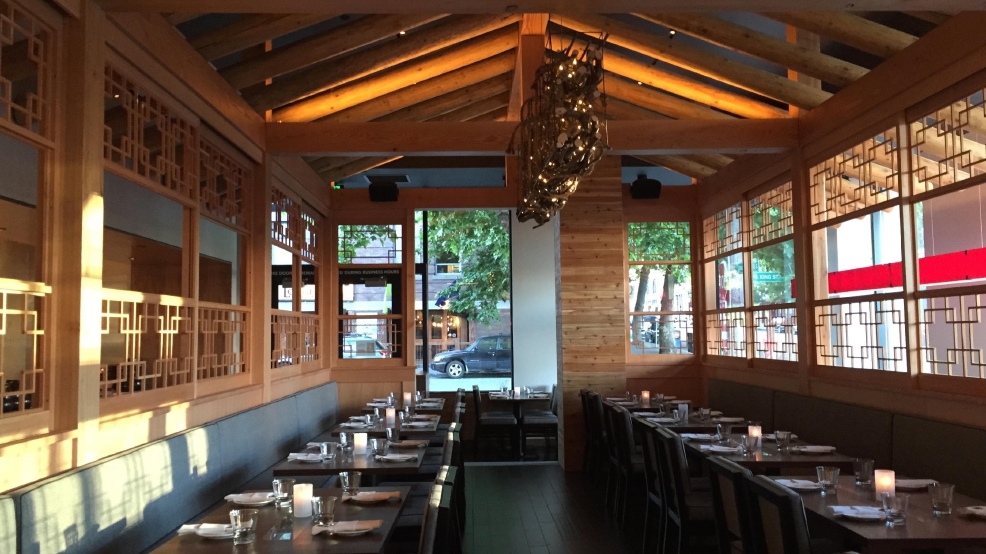 Checking in on Pioneer Square's Girin

If you had Brandon Kirksey's food, you know the guy is skilled when it came to Italian dishes. From scuffing his knees as part of Ethan Stowell Restaurants, such as Tavolata and Rione XIII, to then leaving Seattle for San Francisco's Flour+Water, Seattle eaters have lamented losing one of our own to the Bay Area. But when it was announced last year that he was returning to Seattle, eaters anticipated this new venture. What was surprising is that instead of the Italian food he was known for, Kirksey threw a curveball with the Korean-themed Girin in Pioneer Square.

I recently visited Girin to take in the newish restaurant and converse with Chef Kirksey about his return to Seattle, but with a different region of the world as his muse. The opportunity to be a part of Girin from the ground floor and to leave his imprint were some of the factors that drew Kirksey back to Seattle. Also, that he could take some of knowledge he learned at past restaurants and apply them to Girin. Things like handmade noodles, whole animal butchery (which he often did during his run at Tavolata), and shared plates were all things he knew and thrived with. Girin allowed Kirksey to do this, and introduce Seattle to new flavors and concepts.

Korean food in the Seattle has been on the up and up for a few years, but much of the critical mass has been at the fringes north of Seattle. Lynnwood is home to plenty of Korean restaurants and that's where Kirksey found himself to work for a spell before opening Girin. Through friends of the Girin family, Kirksey spent a month at Chung Sol in Lynnwood. This experience (and spending time touring, eating, and cooking throughout South Korea) informed Kirksey as to the tenets of Korean food. He was informed by this tradition, but not beholden to it in his cooking at Girin. (It's similar to what's happening in the other Washington; there is a restaurant in DC called Little Serow. It's a Thai restaurant, but the chef isn't Thai, but he loved the food and appreciated the challenge. Its gone over so well, it was named one of Bon Appetit's Best New Restaurants a few years ago.) The word 'fusion' is its own f-word to restaurants and Kirksey avoids it, but mostly he wants to view his food through the lens of Korea, but without feeling the constraints of it.

Eating (and drinking) at Girin makes for an experience. Stepping into the space, you'll experience a welcoming vibe with their indoor garden while the bar and restaurant awaits you. On the south side of Girin is their bar; separated from the restaurant, it hosts their happy hours (post-work and late night), which Kirksey envisions being packed to the brim pre- and post-ballgame. The convivial setup of the room makes for a good time. The restaurant is inviting with seating at the open kitchen and two- and four-tops elsewhere in the space.

As you peruse the menu, it may be unfamiliar, but fear not; the staff at Girin is quite accommodating and will walk you through the menu and what to experience. The Gochuchang chicken wings are a menu standout. Sticky from the gochuchang, the spice will keep things interesting, Kirksey said he and his team tried dozens of different variations for the wings before they landed on the version for the menu. Order these. The Tteokbokki is a rice cake dish, dense with chew, but dressed and served with morels and other seasonal ingredients. The main draw of the menu are Girin's Ssam plates; shared plates served with banchan, you'll get a ton of food. Between the proteins (or vegetables) as the mains and the banchan (accompanying side dishes with a Korean meal), you'll have plenty of different items to try with the Ssam plates. And everything is made in-house. Even the kimchi. You'll see earthenware crocks throughout Girin, where their housemade kimchi slowly does its slow dance with fermentation.

When you visit Girin, definitely partake in their makgeolli. It's a housemade drink by Girin's Cody Burns. Akin to sake, it's light and refreshing and goes well with much of what the kitchen is dishing out. Served in a teapot and a bowl, its touch of acidity and lift balances with Girin's fare. The makgeolli is also used as a braising liquid for Girin's baby back ribs. Besides the makgeolli, housemade cocktails and a thoughtful wine list mark the drinks list.

As Kirksey and team at Girin keep producing their take on Korean food, Seattle diners can experience something new and different. The Pioneer Square neighborhood has experienced an influx of new restaurants and Girin fits right in with their food and drinks. What's exciting is to see how someone as talented as Kirksey gets his sea legs and really gets rolling with Girin. That will be something to behold.