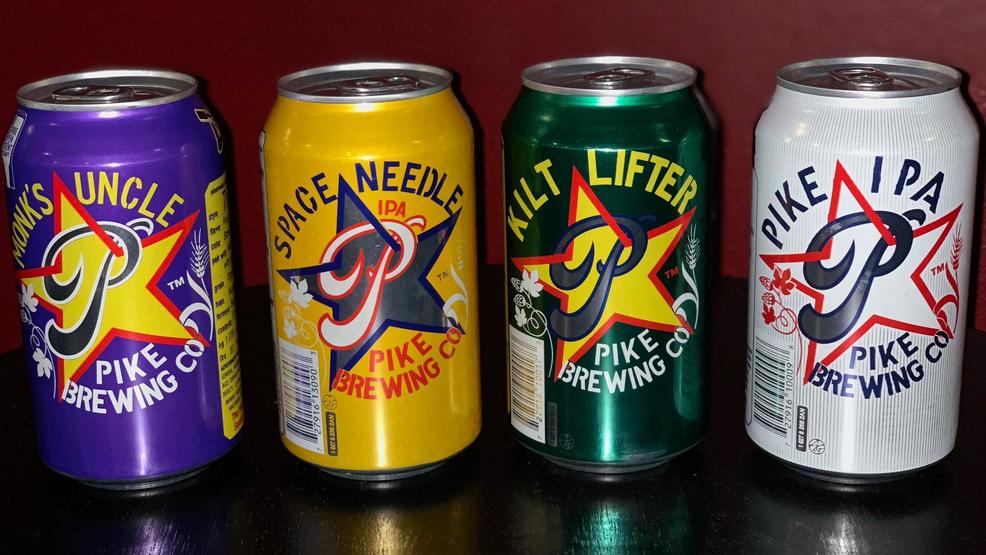 Raise a glass to Pike Brewing, where they recently marked their 29th anniversary with a “Canniversary” celebration!

When founders Charles and Rose Ann Finkel tapped Pike Place Brewing’s first keg on Oct. 17, 1989, it was the third microbrewery in Seattle. Today, 29 years later, Pike Brewing is the oldest independent brewery founded in Seattle. (Hale’s Ales was founded in 1983, but started in Colville and didn’t open in Seattle until 1995.)

The rise of Pike Brewing is both a figurative and literal elevation. Pike Place Brewing was originally located on Western Avenue, at the bottom of the Pike Place Hillclimb. The brewery moved up the hill to its current location in the Pike Place Market in 1996, leaving behind its “Place” and becoming Pike Brewing. They opened the Pike Pub, specializing in pub fare made with local and sustainable ingredients.

While much of Seattle’s history and character has been lost to high-rise condos (#SavetheShowbox) and many of its businesses have been absorbed into multinational corporations, Pike Brewing’s continued independence is something to celebrate.

Charles Finkel explains they’re independent because they simply don’t want to sell. Independence in brewing means the decision on what to brew—based on quality, taste and sustainability— is made locally, not influenced by outside sources that may have ulterior motives like expanding their profit margins rather than sourcing local and sustainable ingredients. Pike’s independence shows in their active participation in the fresh hop craft beer movement, in which hops are harvested fresh from the farm and brewed the same day. This year, Pike brewed two fresh-hop beers. The first, a special edition of Space Needle IPA, features Cascade and Centennial fresh hops from Chelan Valley Hops. The second, Wolf in the Woods IPA, features fresh Citra hops from Perrault Farms in the Yakima Valley.

On their 29th anniversary, Pike Brewing’s spot in Seattle brewing history is assured. Earlier this year, Seattle magazine’s beer awards named them Seattle’s Most Iconic Washington Beer Brand. But the owners of Pike want a stake in Seattle’s future as well: they aim for Pike to become a century-old independent brewery.

VP of Operations and co-owner Drew Gillespie notes that the brewery won’t achieve that goal by remaining stagnant: it must continue to grow and evolve.

As part of its evolution, last year, Pike expanded its operations to the floor above the brewery, adding new cellar space, and opening a new restaurant, Tankard and Tun, which specializes in pairing locally sourced seafood with craft beer. Tankard and Tun features an oyster bar, elegant dining room with beautiful views of the Seattle Waterfront, and a brew deck, decorated with Finkel’s personally curated collection of brewing memorabilia.

Now Pike is modernizing their packaging and updating their logo and branding. Canning has grown into the preferred way to deliver beer to consumers—among other reasons, cans weigh far less and are easier to transport for both brewery and consumer. Recognizing this, Pike is expanding its offerings in cans to include Space Needle IPA, Monk’s Uncle, Kilt Lifter, and Pike IPA.The cans feature a new logo, created by Finkel who also designed Pike’s original labels (and—fun fact—iconic labels for brands such as England’s Samuel Smith).

The star and script “P” design evokes Pike’s retro Seattle roots: the script “P” resembles Rainier Beer’s classic “R,” and the star has appeared on Pike labels since 1989. This new logo symbolizes the brewery’s continued evolution into the future. Charles notes, “We modernized our packaging while maintaining a connection to our own history. Rose Ann and I are proud that Pike Brewing Company continues to grow and evolve as the goal is for Pike become a 100-year-old independent brewery.”

So, next time you’re shopping for beer, look for Pike’s new logo, and consider choosing to support an independent brewer who is part of Seattle’s vibrant history and help them remain a part of Seattle’s future!