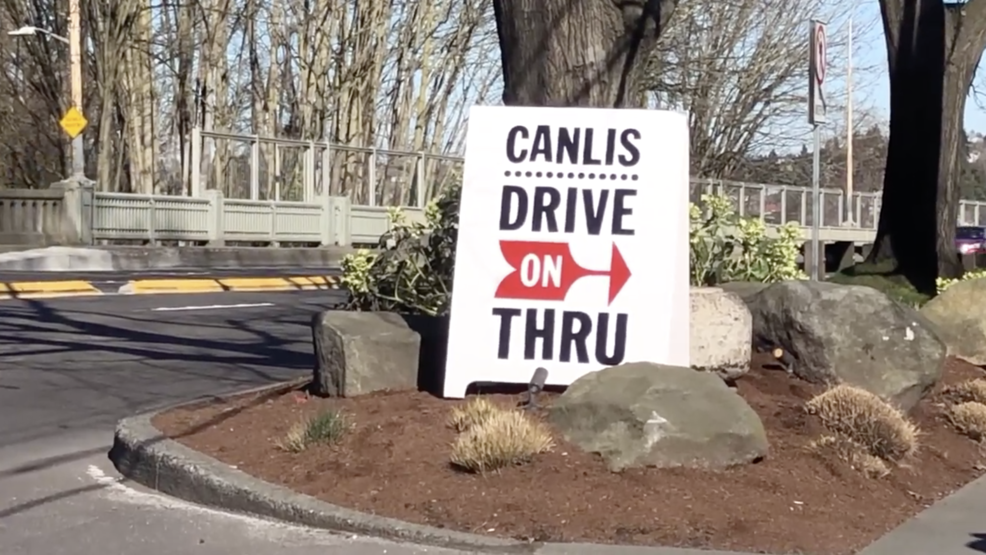 How Canlis switched from fine dining to casual

Author's Note: Canlis made the decision to end it's Drive Thru and Bagel Shed operations on March 25th. Instead, they are dramatically increasing their Family Meal and CSA (Community Support Agriculture) Box delivery.

On a perfectly sunny day, the staff at Seattle's iconic, fine dining institution, Canlis, gathered for a pre-service meeting. It was an utterly ordinary occurrence, something that happens in the restaurant every day, and yet this meeting was nothing short of extraordinary.

"I feel so fortunate we've had this thing in place. That we're ready for this," said third-generation Canlis co-owner Mark Canlis to the assembled group, everyone clad in long sleeve t-shirts and jeans, instead of the normal formal-ware.

This meeting was the culmination of a whirlwind transformation. Canlis' stunning dining room is closed. Perfectly upholstered chairs pushed neatly against plate glass windows and plateware stacked gently into a corner. Everyone here knows it won't be needed, maybe for a while. On this day Canlis became a drive-thru.

"I don't know how long we'll get to do this. Maybe it's just today, maybe it's for the next three months. Who knows? But we have today," said Mark as he started to conclude his address. "Let's go have a good service and keep the promise."

"Chef!" the group responded in unison, before quickly getting back to work.

Mark and his brother Brian, made the decision to take Canlis casual, even before Governor Jay Inslee signed an emergency proclamation to shut down restaurants. They saw it as a chance to serve as much of the city as possible, a chance to keep their staff employed during an increasingly uncertain time. And yet, in the midst of that uncertainty, Canlis was also filled with a palpable sense of hope.

"If you could feel the restaurant a week ago, before we made this announcement and now, there's just such a [renewed] energy. I mean look, the staff knows 'hey, I've got a job and a role to do' and we've got to feed a city and here we go," Mark told me about a half-hour before the drive-thru opened for the first time, though in the midst of the excitement there remained some uncertainty. "I don't know. We'll see if it works. We'll see if people come."

As it turned out, there was no need to worry. The second 11 a.m. hit, the cars came streaming in, and they didn't stop all day long.

"It feels nice to be able to safely deliver food to people and put a smile on their face even though they're not in the dining room. We're still able to carry out our mission by doing this delivery service. You know - service with a smile. It's just nice to see people and have people give us a shot," said one server.

"We're dancing. We're having a good time. Thankful to have jobs," added another, seconds after an impromptu (and properly socially distanced) drive-thru dance party.

Back in the kitchen, things started moving fast, with James Beard Award-winning chef Brady Williams overseeing a grill, flat top and fryer. The team turned out cheeseburgers, veggie melts, French fries and that famous Canlis salad with frantic, yet focused efficiency. In all, they would serve some 1,000 burgers on opening day. A sell-out.

Every corner of the restaurant seemed to be alive with activity. At the iconic bar, bartenders poured homemade citrus soda, instead of cocktails. While a section of the restaurant normally home to some of Canlis' best tables had been transformed into a prep station for New York-style bagels.

It's worth noting here that, unsurprisingly, Canlis takes cleanliness, safety and sanitation very seriously. The list of safety protocols the team follows is laid out on its website and Canlis offers paid sick leave and financial assistance for all its employees.

Drive On Thru is one of three concepts Canlis launched. There's also Canlis Family Meal, where folks living inside Seattle city limits can get a full meal and bottle of wine delivered right to their doorstep (reservations for each week open at 10 a.m. the Friday prior on Tock, and they go fast), and The Bagel Shed, serving fresh bagels, breakfast sandwiches and coffee from 8 a.m.-11 a.m. every weekday morning. When I asked Melissa, who was busy working on bagel dough for the following morning, what she normally does at the restaurant, I was surprised to learn she's part of the front of the house staff, though she spent time as a baker in NYC before moving to Seattle.

"That's the thing about about Canlis, once you're in this family you can do anything." explained Melissa. "If you're working in the dining room and you feel like trying out pastry, sure."

Yes, everyone at Canlis had a job to do, even if it wasn't the one they were hired for. Another Beard Award Winner, Wine and Spirits Director Nelson Daquip, was directing traffic on day one, before he started early morning shifts to oversee operations at The Bagel Shed.

"I think this is our secret power or our super power, to bring people together," said Daquip with a big smile. "It makes me happy. I feel like there's so much joy that needs to go around still. And feeding the city, this is what we do. This is our safe spot."

"In so many ways this is Canlis. This is exactly what we've been doing all along. I think it matters more than ever now," explained Mark. "You start with 'what do we have to be thankful for?' and we work our way out from that. So, I'm thankful for this team, and for this city, and for this incredible day, and for the people that make up this town, and for the leaders and the ones that are receiving people at hospitals. There's incredible things to be celebrated here. It's so easy to look at what we don't have. Maybe this is a time where we as people remember just how alike we all are and when we remember to be appreciative of the things we do have."

On a perfectly sunny Seattle day, in times that seem so far from normal, the simple act of waiting in line for a burger, served in a paper bag, seemed to provide a small sense of normalcy to so many.

"I hope our guests think that this isn't just a story about Canlis, because it isn't. I think this is a story about everyone who woke up this morning and said 'I have something to do'. Whether that's checking on your neighbor or whether that's sending an encouraging word, that's what I want them to think as they drive past that sign on Aurora, is those people woke up and said 'Hey we've got a job to do'," said Mark. "And yeah, we've got a job to do, we've got a town to feed. That's not just a message for my staff, I guess that's a message for the city. It's one day at a time, so we just figure it out."