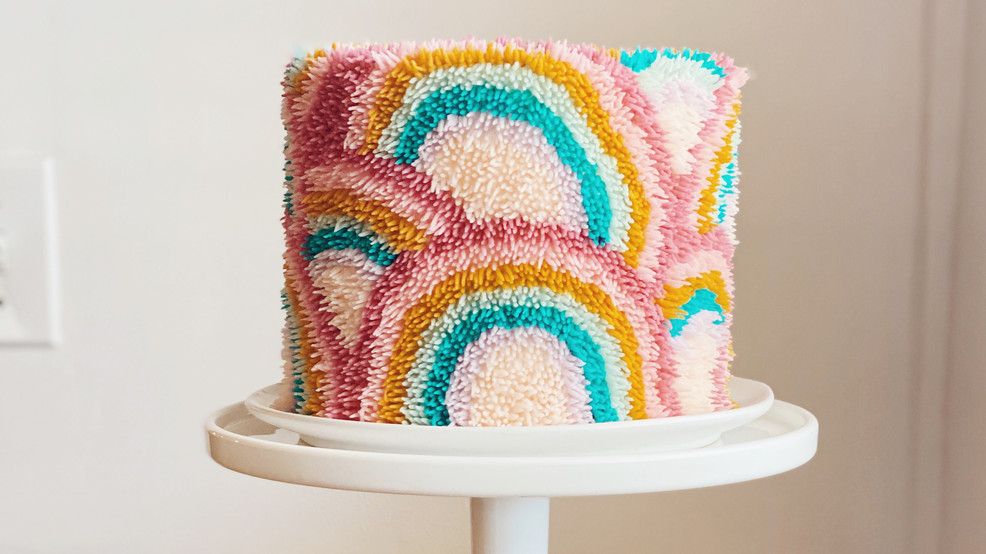 Stretching across her knuckles on both hands, index to pinky finger, spelled out in black letters reads the tattoo, "cake life," the short name for Kait Winowitch's side hustle turned full-fledged baking business: Cake Life Everyday.

The 30-year-old baker creates croissants and dazzling decorated cakes out of a kitchen space in Georgetown, as a one woman show. Working seven days a week, running two parallel businesses, both a croissant delivery program and custom cake outfit, cake has indeed become her life.

Originally from Indiana, Winowitch attended pastry school straight out of high school in Chicago, where she mastered laminated doughs. Her love of cakes would come a little later, after graduating and working in a cupcake shop where she first began decorating. She would then work at a sculpted cake shop, learning to manipulate cake, buttercream, and fondant the same way one might clay to create 3D designs.

In fact, it was the element of design that drew her to cakes more than baking itself.

"Baking is not my favorite part of my job. I would rather do the decorating aspect, " she said. "I love color and design. I actually thought I was going to go into graphic design.".

Prior to pastry school, Winowitch thought she might use her love of design in a different way.

"Growing up, I wanted to be a professional scrapbooker. I really liked doing different layouts," she said.

After some time spent in Louisville, Kentucky, Winowitch found herself in Seattle, where she has hopped around both as a baker at The London Plane, and as a barista at beloved Seattle coffee shops like Monorail Espresso, where on Fridays she used to make croissants to accompany the espresso shots she pulled.

In November of 2019, she struck out on her own. While working various full-time jobs, she had maintained a side hustle of making cakes and decided it was time to become her own boss and focus on the cake life. When the pandemic hit, the events and weddings her cakes were featured in ceased, and so she pivoted her business to include croissants.

She started her popular online croissant ordering program. Every Tuesday and Thursday, you can place an order from a rotating menu of flavors to be delivered the next day, either Wednesday or Friday. If you miss the chance to place an order (which is an easy thing to do, given that she often sells out in minutes), there is a second chance on Sundays to grab croissants at her pop-up with partner Lowercase Brewing, who owns the commercial kitchen space she works in. Croissant flavors span sweet and savory, from everything bagel seasoning with scallion cream cheese filling to raspberry with champagne cream.

"I didn't even envision having the equipment that I do now, that I had to buy in order to operate that kind of business [croissants], but it worked out, and I didn't know I could love something as much as, or sometimes more than cake decorating," Winowitch said.

If you are looking to snag a custom cake, plan in advance, as, just like the croissants, she's often booked up. Winowitch's cake designs include modeled dinosaurs and her signature "shag" cakes, which use frosting applied in a shag carpet-like texture in various patterns to create a design. This style is particularly labor-intensive, taking anywhere from 2-10 hours of piping to complete, but the final effect is mesmerizing. Whether cake or croissant, Winowitch has a style all her own—one worth stalking Instagram to get a chance to sample.