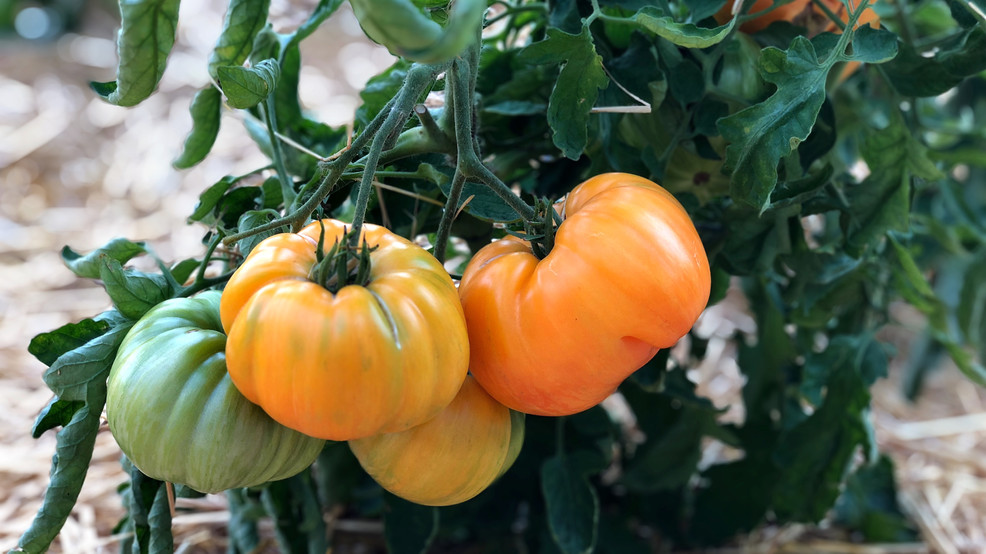 At Brandywine Kitchen in Bellingham, it all began with tomatoes

Brandywine Kitchen is a story about soil.

For co-founders Azizi Tookas and Chris Sunde, dirt — and what grew within it — was about possibilities. The childhood friends' lives had followed similar trajectories, as they moved from Seattle to Bellingham for college, and stayed to manage restaurant kitchens after graduation.

“It was always a dream of ours to work for ourselves. We wanted to own our own restaurant,” said Tookas.

Realizing that dream began with tomatoes. Specifically, heirloom tomatoes, which Tookas had first encountered in an internship at a biodynamic farm.

“I was blown away,” he said. “These crazy colored, shaped and flavored tomatoes — I immediately got some seeds.”

In a hoop house in Bellingham, Tookas and Sunde’s seed collection grew to about 120 plants bearing around 10 varieties. It was a chance to get back to the soil.

“This was our hobby. Something to share with the community,” Tookas said.

In 2005, Brandywine Gardens debuted at the Bellingham Farmers Market. The stall — named after an heirloom tomato varietal, naturally — hawked the colorful, flavorful produce at a time before food culture had fully taken off.

“We would bring the tomatoes to the farmers market every Sunday and sell them at $4 a pound,” said Tookas. “Back in 2006, people thought you were insane.” But at the height of the season, they almost never went home with tomatoes.

With the stall’s popularity, it was a natural transition to food production. In 2008, Brandywine Gardens grew into Brandywine Kitchen, launching with baguettes and sandwiches at the market. As Tookas and Sunde continued to work other jobs, they plotted how to turn their farmers market foray into a brick-and-mortar restaurant.

In 2011, Tookas and Sunde were approached by a local property owner. With a reduced rate and commercial kitchen equipment left behind by the previous tenant, it was too good an opportunity to pass up.

“Signing that commercial real estate lease was very nerve-wracking. That was a big leap for us. Both of us quit our jobs and decided to just go all in,” Tookas said.

The risk paid off — in July 2011, Brandywine Kitchen emerged onto Commercial Street with a loyal following.

"Bellingham’s a tight-knit community, especially back then,” Tookas said. “We were known as these local guys trying to start a restaurant.”

Though Tookas and Sunde are now busy running the restaurant, a commitment to local soil continues to guide their approach to food.

“We source seasonal ingredients from friends at the farmers market. We built those relationships, became good friends and still have those connections,” Tookas said.

And they’re still growing tomatoes. Though their hoop house is much smaller, they have about 20 plants spanning between five and seven varieties, which make appearances on the menu.

Nothing less would be expected from restaurateurs with a “seed to plate” philosophy. Their ethos urges consideration of both the local economic and larger environmental impact of sustainable farming — as well as the freshness and quality of the food.

“It’s important to keep money flowing with the community,” said Tookas. “And there’s the health piece, and the flavor piece. When you buy local, there is less travel, less fossil fuel, and the food coming from local soils isn’t sprayed with pesticides and the soil’s not depleted.”

Brandywine Kitchen is a testament to the power of a local food economy, and the community it inspires. The restaurant’s brick wall is stuffed with notes scrawled onto napkins and left behind in the cracks. Many diners still remember Tookas and Sunde from their days at the farmers market. Word of mouth praise from happy patrons, Tookas says, is what helps Brandywine thrive.

This summer, Brandywine will celebrate a full decade of being a brick-and-mortar restaurant — a decade which Tookas attributes to Brandywine’s loyal following of diners and continued close relationships with growers.

“We feel really lucky that we have the clients that we do, who appreciate what we do,” Tookas said. “We’ve been a part of the community for 23 years.”

Want to support more small businesses like Brandywine? We're proud to collaborate with Intentionalist, an online guide that makes it easier for you to find/connect with diverse local businesses owned by women, people of color, veterans, members of the LGBTQ community, and people with disabilities.