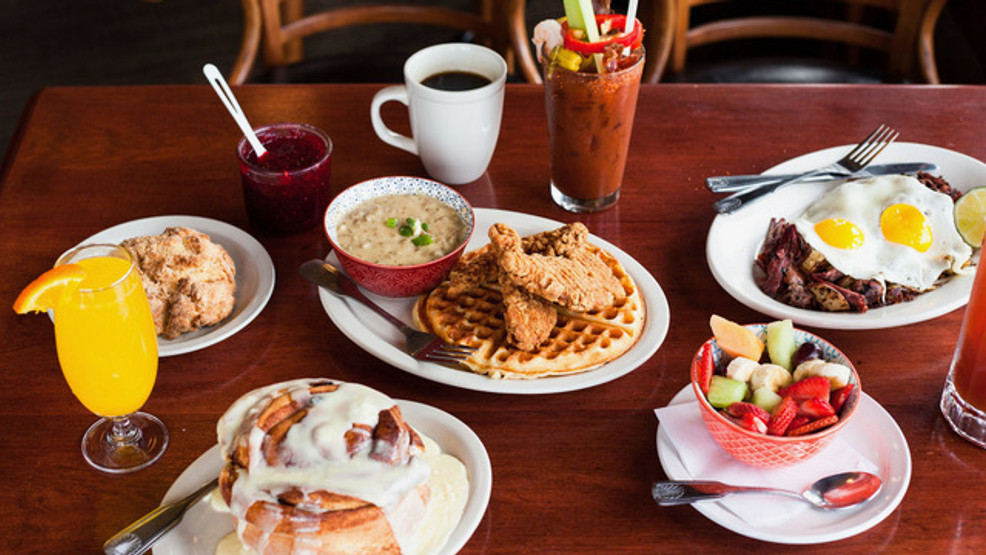 When the pandemic began affecting Seattle-area restaurants over a year ago, Wendy Morales rolled up her sleeves.

“There’s no way we’re going down,” she said, speaking about her restaurant, The Blue Star Cafe & Pub in Wallingford. Her two daughters stepped in to help out while Morales donned an apron and headed into the kitchen.

Morales grew up at The Blue Star. Her father Leon Torrey bought the restaurant when she was 10 years old, and she took over as owner in 2009. Adapting to running a restaurant during the pandemic was a challenge, but Morales likes challenging herself. Problem-solving is one of her strong suits, something she’s proven time and again during her tenure at The Blue Star.

The quality of the food and drinks at The Blue Star speaks for itself. An out-of-this-world Bloody Mary paired with perfectly crispy fried chicken and a homemade waffle drizzled with Sriracha maple syrup? We’re totally sold on this any day, for any meal. But we owe this amazing feast to Morales for running this family business and welcoming us into The Blue Star, which she considers an extension of her own home.

The menu reflects this classic style that was part of Torrey's original concept for The Blue Star. He wanted to make food from scratch, using homemade ingredients to make phenomenal comfort foods to gain a loyal customer base. Morales hasn’t strayed from this, and the longevity of The Blue Star speaks to her success in keeping her father’s legacy alive. Morales still welcomes patrons who knew her father in his early Seattle restaurateur days in the 80s.

The Kitchen Sink sandwich with albacore tuna salad, sautéed mushrooms, and avocado on grilled sourdough is a recipe Torrey served at his first restaurant in Madison Park that opened in 1972.

“I’ve always wanted to honor what he started and his values,” Morales said.

Morales has shown her dedication to this throughout her years at The Blue Star, but perhaps none more than this past year. The small bread vendor Morales had used for years quit for good once the pandemic began. Losing these beloved baked goods wasn’t an option for Morales, so she hired the German baker to teach her everything he knew about baking his incredible bread and bought his baking equipment. The Blue Star’s kitchen is now also a bakery.

“It's been interesting getting to know ourselves better,” Morales said. “I grew up in the business, but through this pandemic, it's been a time to reflect on what we're really good at. It’s kind of solidified who we are.”

The customers Morales sees every day remind her that The Blue Star is doing something right. The kitchen staff recognizes familiar daily orders. When they began packing orders to-go during the pandemic, they start leaving notes on the paper bags to check in on customers.

“We’re packing up their bags with love,” Morales said. “We appreciate their orders so much. We’re so grateful.”

Morales is looking forward to the day when her restaurant can be full of patrons again. The energy of the restaurant is something that drew her back in after she stepped away post-college.

“There’s just this energy that's so positive,” she said. “They’re in my house and getting to experience making their day special. It’s an honor they come into the restaurant.”

Morales started her restaurant career when she was 10 years old, earning a penny for each napkin she folded at her dad’s restaurants. These days her tasks look a little different, but her lifetime spent providing homemade comfort food from scratch is evident in every facet of The Blue Star. And there’s still the occasional napkin folding.

The Blue Star Cafe & Pub is located at 4512 Stone Way N in Wallingford. It’s open for dine-in and takeout Sunday and Monday from 8 a.m. until 3 p.m. and Tuesday through Saturday from 8 a.m. until 8:30 p.m. Want to support more small businesses like Blue Star? We're proud to collaborate with Intentionalist, an online guide that makes it easier for you to find/connect with diverse local businesses owned by women, people of color, veterans, members of the LGBTQ community, and people with disabilities.