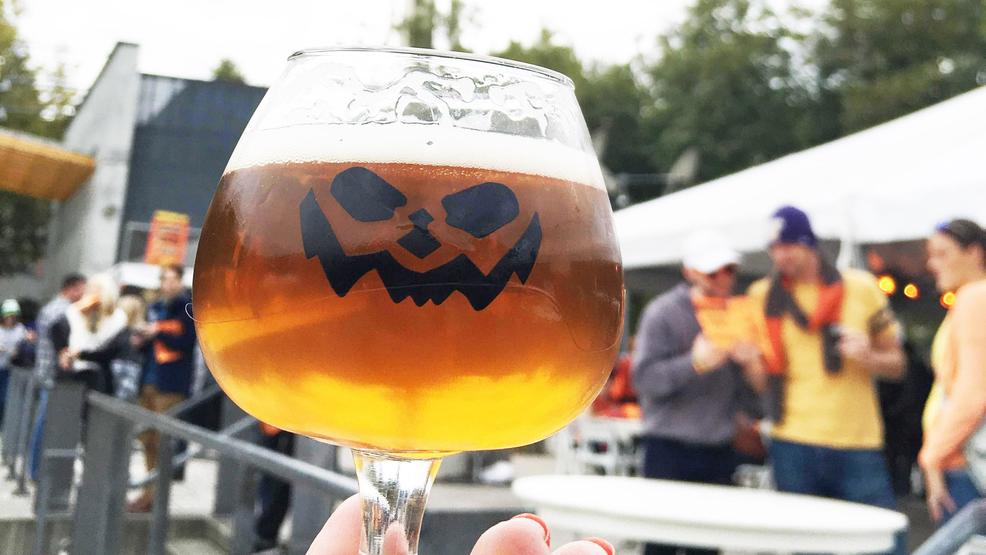 We rang in fall at Elysian Brewing’s 13th annual Great Pumpkin Beer Festival at Seattle Center on September 29 and 30! Festival-goers enjoyed pleasant fall weather while sampling selections of more than 80 pumpkin brews from around the country, and enjoying entertainment provided by Thee Outré Fringe and Chaotic Noise and music curated by KEXP. The day was topped off by a little “shopping” for GPBF souvenirs in Elysian’s Odditorium! Cheers, Elysian, on the best GPBF yet! (See you there next year—mark your calendar for October 5 and 6, 2018!) Photo: Michelle Sistek / Seattle Refined)
SEE MORE

On Saturday, Seattle Refined ushered in autumn at Elysian Brewing’s 13th annual Great Pumpkin Beer Festival. Tasting all those different pumpkin beers got us in the mood for a good old-fashioned pumpkin carving party. Pumpkin carving is thirsty work, and what could be a more festive refreshment than a few pumpkin beers?

Based on some of our favorites from the festival, here are our suggestions for the best sips for your pumpkin carving party guests.

Elysian Brewing Night Owl Pumpkin Ale (and Friends)
When it occurs to you 30 minutes before your guests arrive that you should be serving a festive pumpkin ale, Night Owl might be a good choice. It’s ubiquitous—you’ll find those owl eyes haunting you from any refrigerated beer case—but it’s also a classic: Elysian has been brewing it since 1997 (their Gameworks days)! Night Owl is a medium-bodied pumpkin ale brewed with more than seven pounds of pumpkin per barrel and heartily spiced with ginger, cinnamon, nutmeg, cloves and allspice. (Fun fact: Elysian cooks the spices to pasteurize them before adding them to the beer during the conditioning phase.) It’s pumpkin pie in a a glass!

Also widely available (if you have a few minutes more to shop) are Elysian’s Great Pumpkin Imperial Pumpkin Ale, Dark O’ the Moon Pumpkin Stout, and Punkuccino Coffee Pumpkin Ale. If you’re hosting a pumpkin dinner along with your carving party, Punkuccino is an excellent after-dinner beer. Since it also contains Stumptown coffee toddy, It may also keep your guests carving long into the night.

If you’re planning ahead and want something to surprise your guests with a brew they’ve never tried before, haul your growlers on down to one of Elysian’s brewpubs—OR their shiny new Georgetown taproom—and bring home one of Elysian’s brand-new pumpkin beers! Cursed Hearse is a saison-base beer brewed with roasted kabocha squash and delicately seasoned with coriander, Szechuan peppercorns, cinnamon, and star anise. Dark Knife is a pumpkin Schwarzbier, a crisp dark lager that goes down smooth. (That’s right a pumpkin LAGER—that’s not something you see everyday!)

Reuben’s Brews Imperial Pumpkin
Local Seattle superstar Reuben’s Brews is a hit at any party, and their Imperial Pumpkin Ale will be the life of your carving party! Spicy and subtly sweet, Reuben’s intense pumpkin flavor complements rich malt and a dose of hops to result in a smooth yet hearty brew with a creamy mouthfeel. For your guests who don’t think they like pumpkin beer, Reuben’s Imperial Pumpkin may “trick” them into changing their minds! At 8.7% ABV, your guests will want to pace themselves, but pick up a few bottles as a Halloween “treat” for your besties! (See what we did there?)

Rogue Pumpkin Patch Ale
Since pumpkin carving traditionally occurs closer to Halloween than Thanksgiving (unless you’re in Canada, that is), maybe you’re angling for a beer that’s more roasted pumpkin and less pumpkin pie. Rogue Pumpkin Patch Ale does the trick. The flavor is fresh pumpkin with a mere suggestion of spice. You have to admire Rogue’s home-grown approach—they brew Pumpkin Patch with their own Rogue Farms pumpkins, harvested in Independence, Oregon, and trucked

to their Newport brewery, where they’re quickly roasted and tossed into the brew kettle. “From patch to batch,” pumpkin ale doesn’t get fresher than this!

Southern Tier Pumking
It’s not from the Northwest—far from it, in fact (brewed in Lakewood, New York), but you can’t write a legit story about pumpkin beer without mentioning Southern Tier. This is an Imperial Pumpkin Ale, so (like Reuben’s Imperial Pumpkin) a little goes a long way. This bewitching brew is complex, but incredibly balanced—slightly sweet and pleasantly spicy. Pumking is the King of (Pumpkin) Beers. In your better stocked stores, keep an eye out for Coffee Pumking, which adds smooth coffee flavor to the brew for a spellbinding experience!

Deschutes Hopzeit Autumn IPA
Okay, we’re cheating on this one: it’s not a pumpkin beer. But pumpkin beer is an acquired taste, and some people (looking at you, Rhonda) have just not acquired it. So, be kind to your non-pumpkin-loving friends, and pick up some Hopzeit. Inspired by the German Märzen style, but definitely not your Opa’s Oktoberfest brew. Deschutes combines classic Munich, Vienna, and Pilsner malts with a generous helping of Herkules, Sterling, and Hull Melon German hop varietals, to create a well-balanced autumn ale.