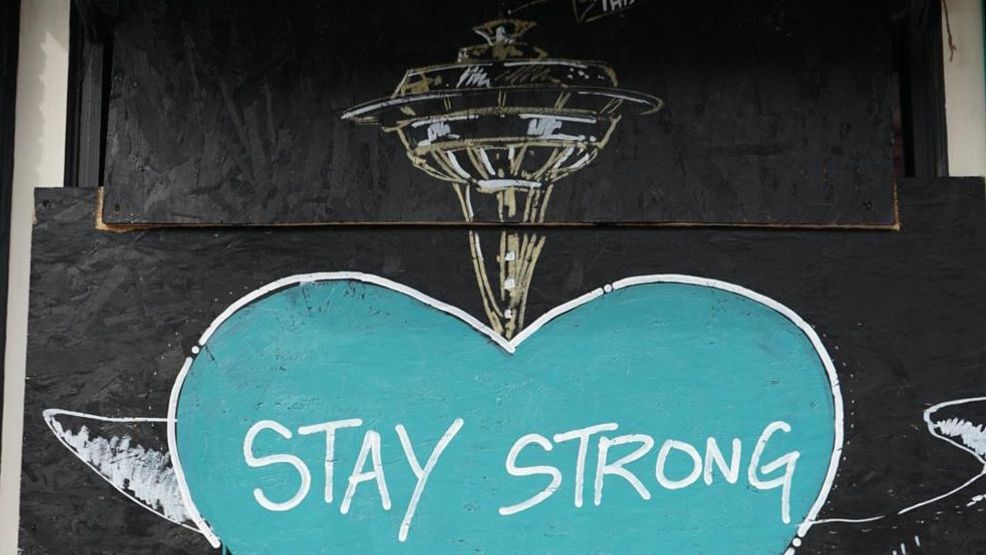 As Gov. Jay Inslee's "Stay Home, Stay Healthy" order went into effect, the usual sounds of the city —the roar of traffic, the hum of busy sidewalks, the sounds of talking, of laughter emanating from bustling bars and restaurants — were replaced, largely, by silence. With folks hunkering down inside and restaurants unable to allow dine-in guests, Brian Lee knew he needed to take steps to protect his business.

"I was the first person to board up in Belltown," he said.

Lee owns Belltown Pizza on 1st Avenue. They specialize in New York-style pizza and cocktails, and, until this pandemic, catered to the late-night crowd by offering drinks and pizza by the slice until 2 a.m. every day of the week.

But in those first days of the stay-home order, Lee was not only trying to figure out if he could keep the restaurant open but also why Belltown Pizza had become a ripe target for vandalism.

"Within the first 48 hours, someone came by and tagged my whole restaurant. It wasn't tastefully done or respectfully done," Lee said.

He knew he couldn't just leave the graffiti. As he mulled what to do, Lee was struck with an idea. He wrote a post on Facebook looking for friends, or friends of friends, who were muralists or artists. It was a shot in the dark, and Lee didn't know if anyone would respond. As it turned out, the response was overwhelming.

"Within two or three hours, I had 200 artists in my inbox asking if I had anything for them," said Lee.

A total of eleven artists worked on Belltown Pizza, turning the plywood boards into an impromptu art display. Noted Seattle artist Patrick Nguyen, better known as Dozfy (who we recently profiled on Refined), did the front door.

[Signs of Seattle: Notes of good will, positivity all over our city]

"[Brian] mentioned 'Well I got sprayed up but instead of getting angry, let's use that vehicle of these boards like canvas,'" explained Nguyen. "That board came out of necessity to protect something [restaurant owners] love while we are in a dire time. Let's use those boards to also send a positive message."

Lee didn't stop with his own restaurant. He's now the point person for these kinds of projects, helping to connect artists with other restaurant owners around the neighborhood.

"Boarded up windows are depressing. I'm just trying to bring a little light to the community that lives in the neighborhood. They appreciate being able to see artwork. I can't even count how many people have come by to say thank you. The community appreciates it more than I imagined when I started," said Lee.

Once things return to some semblance of normalcy and the boards come down, Lee hopes to collect the artwork and do a gallery showing or put the pieces up for bid, using the money raised to stimulate the community again.

"The concept is to save all this stuff and display it for people who weren't able to be downtown during this time," explained Lee. "I want to show what folks in the inner-city did to make Seattle brighter during a dark time."

For now, Lee is taking it day-by-day. Belltown Pizza is currently open for takeout orders daily from 4 to 9:30 p.m. They're also selling slices until 10 p.m., or until they're gone. Like so many other restaurants, Lee admits they're feeling the financial strain. As he put it, "the guests and clientele may stop, but none of the bills do." Yet despite these challenges, Lee is doing his best to remain positive.

"We're struggling right now, but I feel like us staying open gives the community hope that not everyone is giving up," he said. "We're just chin up, chest out, trying to create a little ray of sunshine on a gray day."