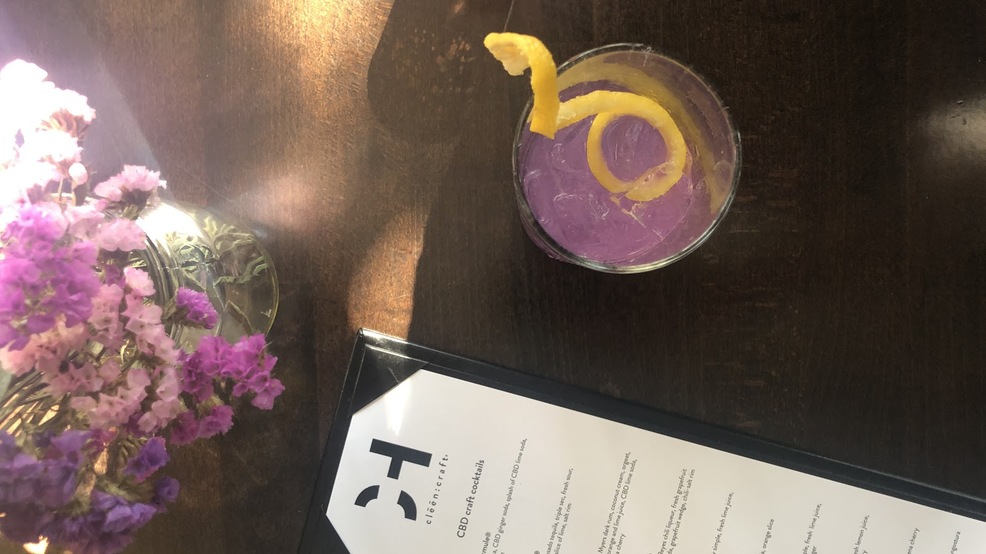 Cleen:craft offers their sodas either standalone (incredible!) or as a mixed drink, should you be in the mood. Something that I was impressed with - they have mixed drinks both with and without alcohol. It would be easy for the mixed to be an afterthought with such a star soda, but the bartender went above and beyond to create a cocktail menu featuring an array of interesting flavors. (Image: Lizzie Braicks-Rinker / Seattle Refined)
SEE MORE

That's So Seattle: There's now a CBD Soda Tasting Room in the heart of Belltown

I have this thing for CBD.

It hasn’t always been this way. In fact, if you were to go back in time and tell my high school self that I would find myself in the CBD niche I would probably say something along the lines of "Huh??" - while also passionately denying it. I find myself here after years of writing about the wellness space; mindfulness, yoga, fitness, testing weird health trends and writing about them (remember when I went on a juice cleanse?) CBD was a natural next step.

I love CBD, though. Like shopping for new school supplies, it feels so full of possibility. It can improve mood! It helps with inflammation! It makes it rain puppies! CBD is like the coconut oil of 2011. It can do all the things. Or at least it seems like it can. Maybe.

I knew that perhaps my CBD obsession had grown too large when, at a recent media event, I was introduced to a marketing exec as a CBD blogger. So folks, here I am.

As Seattle’s CBD blogger (ha!), I was recently invited to preview cleen:craft CBD sodas at their new tasting room in Belltown. It’s a rough job, but somebody has to do it.

The cleen:craft tasting room is located in the heart of Belltown, a quick hop-skip-and a jump from the Space Needle. My first thought upon walking up was: tourists are going to love this. I don’t mean that in a negative way. Instead, I think that cleen:craft has figured something out with their location. They’re central enough to the epicenter of the city for locals, and close enough to big landmarks to entice weary Seattle travelers to try something new.

Marcus Charles, CEO of cln:craft, generously guided me around both the tasting room and the cocktail menu while explaining how cleen:craft was born. If the name Marcus Charles sounds familiar, it’s likely that you recognize some of his other ventures; Marcus’ Martini Heaven and Neumos. Yes, that Neumos. Charles knows Seattle. Something that I loved so much about talking with him about cleen:craft is that he so clearly understands the heartbeat of our city, and what makes us non-committal coffee drinkers tick.

cleen:craft was born out of Marcus’ own research into the endocannabinoid system (spoiler: it’s pretty cool) and the benefits that industrial hemp could have on our environment over the long term (see here: the Amazon is on fire!). Let’s be honest here, Charles also gets the bar scene. In his own words - "I know how hard it is to find crafted, ready-to-drink beverages with wholesome ingredients". As somebody who doesn’t always want to drink, but typically wants something more than a fountain soda at an upscale restaurant, I appreciate what cleen:craft is doing. Their three soda flavors (lime, ginger, and cola) are each thoughtful and complex. I was essentially a broken record sitting across from Charles as he talked exclaiming "Wow this is so good!" and "OMG this one is good too!" You can tell that cleen:craft sodas are packed with real ingredients. In fact, you can actually see the ingredients if you pour the soda into a glass. It’s incredible.

CBD can be intimidating. It’s confusing. The majority of shoppers don’t immediately want to run into a cannabis shop, and I often am asked "Umm, how do I use this?" cleen:craft is an accessible option for the CBD curious and enthusiasts alike. Each can contains 16 mg of CBD, just enough to give you a mood boost. If you haven’t tried CBD before, I would liken the experience to feeling bubbly all over. CBD sodas, specifically cleen:craft, are an instant mood booster. It wouldn’t be a stretch to say that drinking cleen:craft soda makes your body feel like a soda - a sensation that I didn’t know I needed but now can’t get enough of.

cleen:craft offers their sodas either standalone (incredible!) or as a mixed drink, should you be in the mood. Something that I was impressed with - they have mixed drinks both with and without alcohol. It would be easy for the mixed to be an afterthought with such a star soda, but the bartender went above and beyond to create a cocktail menu featuring an array of interesting flavors. The menu is thoughtful enough to feature something for everyone (there was a drink mixed with cold brew I couldn’t get enough of) without being overwhelming. I left with a case of soda and within 24 hours needed to re-up after chugging a few myself and sharing with friends. The general response was "Oh my god. Where can I get this?!"

You can try the cleen:craft in the Belltown tasting room (open 4PM - midnight Thursday-Sunday), by purchasing from any of these stores, or ordering online. If you venture to the tasting room I recommend trying the CBD mule. It’s a delight.