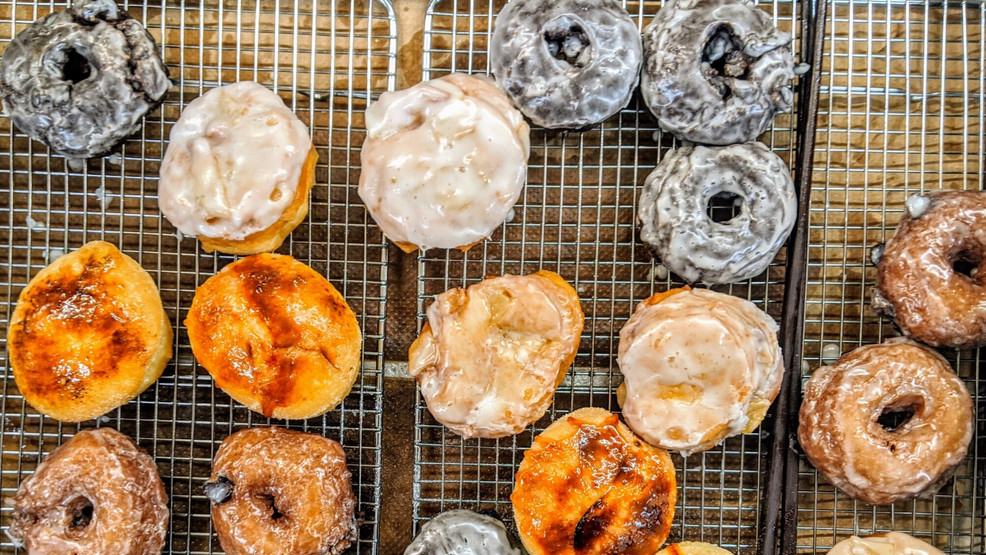 No Cold Donuts Allowed: 9th and Hennepin's sweet treats are made to order

We love you, but it's time for us to break up. We've found something more enticing that suits us better. It's an apple and fig fritter with a honey and brandy glaze. Next week it'll be a chocolate stout cake donut with an espresso glaze. The week after will be an almond buttermilk bar with cacao nib sugar or perhaps the blueberry fritter with a cardamom glaze.

Our new objects of affection are found at 9th and Hennepin Donuts, run by local chef and pastry mastermind Justin Newstrum. Perhaps tied with a sunny summer afternoon at Gas Works Park or catching the sunset at Golden Gardens, donuts are one of life's greatest pleasures. Tucked into an unassuming window in West Seattle's Delridge neighborhood lies some of the most unconventional and delicious donuts that Newstrum serves hot and fried-to-order.

9th and Hennepin Donuts has a unique formula going for it. Using seasonal ingredients fresh from the local farmers' markets, Newstrum is creating bold combinations that expand our horizons of what flavors we can expect from a donut. Newstrum's menu changes weekly, always featuring a four-donut lineup of one fritter, one cake donut, one raised (and usually filled), and one wildcard. His flavors are the product of an endless quest for learning, exploring new ideas, and playing with combinations we find all over menus in the salads and main dishes but rarely in desserts. Butternut squash with sage, for example, is everyone's favorite ravioli flavor so Newstrum took to his kitchen to translate the flavor combination into the perfect donut: a butternut squash cake donut with a sage and brown butter glaze.

The idea for 9th and Hennepin came to Newstrum during a visit to the infamous Cafe Du Monde in New Orleans, famous for serving fresh beignets in record quantities.

"I remember thinking, 'Wouldn't it be great if I could have a donut shop that cooked all the donuts to order?'" Newstrum said. "Just because the world is used to eating cold doughnuts at this point doesn't change the fact that they're still a fried food that's better when it's hot."

March of 2020 marked 9th and Hennepin's second anniversary of being a Seattle-area farmers' market staple. COVID-19, however, has shifted the business solely to its commissary kitchen take-out window in West Seattle, where Newstrum was previously mixing doughs and glazes before setting off for the market.

9th and Hennepin began taking orders online for weekend pickup in late March, as well as serving walk-up orders. Newstrum expected orders to trickle in during weekend morning hours, assuming people would wake up on a Sunday morning, think of delicious donuts, place an order, and come for pickup that morning. To Newstrum's surprise, a huge majority of the clientele pre-ordered donuts days in advance. He didn't assume enjoying weekend donuts was a premeditated part of anyone's life, but his customers proved him wrong.

From the beginning of Newstrum's days as a chef, he's been sourcing seasonal ingredients from local farmers.

"I would go down to the Pike Place Market and chat with the vendors," Newstrum said of one of his first chef positions at an Italian restaurant in the market. "I'd realize these peaches from Martin Family Orchards are freaking phenomenal. Give me a case of those, and I'll take them back to the kitchen and figure out something to do with them. Almost all the restaurants I've worked for in the last 20 years have been very farm to table and seasonal focus, and now that's just part of who I am."

Huckleberries, Macintosh apples, honey, and carrots, all from local farmers, are just a small selection of ingredients Newstrum has used recently in donut recipes for 9th and Hennepin. Winter apples, pears, and quince will soon move over for later-winter rhubarb to make an appearance before berries and stone fruit take over for summer flavors.

While Newstrum has rearranged 9th and Hennepin to adapt to pandemic life, it hasn't necessarily been a negative experience. Space is limited at farmers' markets, leaving Newstrum with two deep fryers to produce four types of donuts. For example, a fritter needs to be fried at a different temperature than a raised and filled donut, requiring each fryer to have a temperature of its own to produce one type of donut.

However, at his commissary kitchen, Newstrum has more space to experiment and more fryers to work with. To accommodate one of the most-requested items, Newstrum has been experimenting with gluten-free donuts thanks to access to a third fryer in his kitchen. Gluten-free products require their own fryer to avoid cross-contamination.

"Working with the gluten-free donuts is something that keeps me interested, keeps me learning, keeps me trying different tastes, different flavors, and ways to make different things work."

9th and Hennepin is open Friday, Saturday, and Sunday from 8 a.m. until noon. Pre-orders are encouraged, but walk-up orders are accepted as long as the shop isn’t sold out for the day. Wait times are generally under 15 minutes for walk-up orders. The weekly menu goes live Wednesday around 6 p.m. for online ordering and delicious weekend planning.