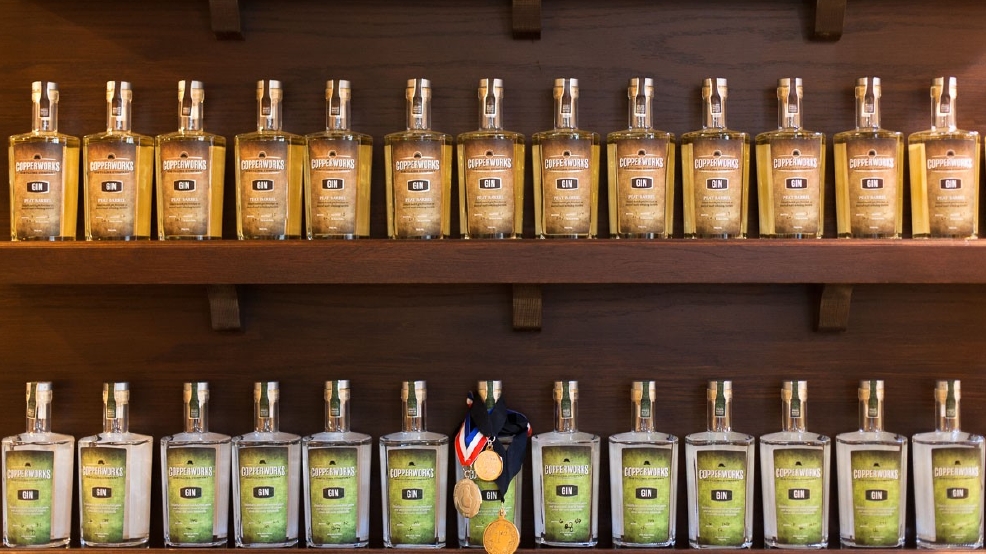 5 Washington distillers you should get to know right away

PROOF - the Washington distillers' festival, was held at Fremont Studios last Saturday night. We checked it out, and were thoroughly impressed - especially by these five distillers we personally think you should get to know immediately.

Four Leaf Spirits/ Puget Sound Rum Company, Woodinville
While Four Leaf Spirits is known for its two unusual tea-infused spirits, we were most excited about the rum they're making under the Puget Sound Rum Company brand! Many Washington distillers are making gin and vodka, but few are making rum. And no one is more focused on rum than these guys, who currently market two different rums - Rum 47, a heavy white rum, and Comb and Cane (C&C), a honey-flavored rum. Four Leaf/PSRC uses a Jamaican- style pot still, which is designed to capture the rich flavor of the organic panela, the whole cane sugar they use to make the rum. We sipped the Rum 47 white rum neat, and found it spicier and more flavorful than common white rums; we also tried it mixed with lime juice and simple syrup in a delicious "original daiquiri." The C&C is modeled on sweet honey rum liqueurs from the Canary Islands, though less sweet and of higher proof. Four Leaf/PSRC adds Pacific Northwest honey to the Rum 47 to create a flavorful, delicately sweet sipping rum. If you need any more reason to give rum a chance, Four Leaf donates a portion of their profits to cancer research!

Heritage Distilling Co., Gig Harbor
Heritage Distilling Co. stood out by the very "cool" way they dispensed their samples --poured down an ice luge! Heritage uses the very first Italian still in North America to brew its small-batch offerings. Their offerings are many and varied--gin, vodka, numerous flavored vodkas, as well as whiskey. We particularly enjoyed the coffee vodka (especially on the rocks!), but the Brown Sugar Bourbon poured down the ice luge was the big winner: we had to bring home our very own bottle! (We'll have to do without the ice luge, though.)

Scratch Distillery, Edmonds
Scratch Distillery opened up a year ago near the Edmonds ferry terminal, in the newly reimagined Salish Crossing center. (It's in the same building as the new Cascadia Art Museum.) Owners Bryan and Kim Karrick are passionate about gin, but Scratch currently features 11 products, including gin, vodka, infused vodkas, and German bier schnaps. Whiskey is also in their future. We particularly enjoyed the pepper vodka we tried at Proof (and look forward to visiting Scratch and trying the bier schnaps)!

Sidetrack Distillery, Kent
Sidetrack Distillery takes "Drink Local" to a new level! They make a variety of all-natural liqueurs, brandies, and specialty spirits -- including Bete, their award-winning beet spirit. Here's the twist: the fresh herbs, berries, vegetables and nuts they use are all grown on the distillery's own farm in the Kent Valley! Their wide-range of liqueur flavors include raspberry, Nocino (walnut-flavored), Shiso (an Asian herb from the mint family, which yields a citrusy, minty flavor), and -- our favorite -- lemon verbena.

Copperworks Distilling Company, Seattle
Copperworks is currently distilling small-batch gin and vodka in the heart of Seattle's downtown waterfront. But they're on their way to bigger things -- their American single-malt whiskey, made from a base of Washington-grown malted barley -- will be ready in the next month or two. (Recurring theme: Local distillery becoming known for its gin and vodka while waiting for its whiskey to be ready.) Copperworks' four traditional copper stills were hand-built specifically for them by expert coppersmiths in the Scottish highlands. They distill each of their products in a still best suited to that spirit, helping them achieve distinctive flavor profiles. We saw an example of their distinctive flavors in the vodka we sampled -- a hint of sweetness and a whisper of vanilla.

We have one more product we're pretty excited about, even though we can't count just a single product as a distillery. Meet your favorite drink's new best friend: kkAda Caramel Liqueur. (Since it's hard to order what you can't say, you need to know it's pronounced "kah-day.") This vodka-based, caramel-flavored liqueur is gluten-free AND dairy-free, made from Indian spices and curries. Zane Seely and Charlotte Gilbert are on a mission to show you just how versatile their amazing spirit can be: they insist it can be added to any drink or cocktail, taking an ordinary drink to a whole other level. After trying a flight of four different tastes -- kkAda on its own, as a shooter with a lick of salt (salted caramel), mixed with Fireball Cinnamon Whisky (Red Hot flavor), and mixed with Crown Royale Regal Apple (caramel apple) -- we're believers! Pick up a bottle and try it for yourself!