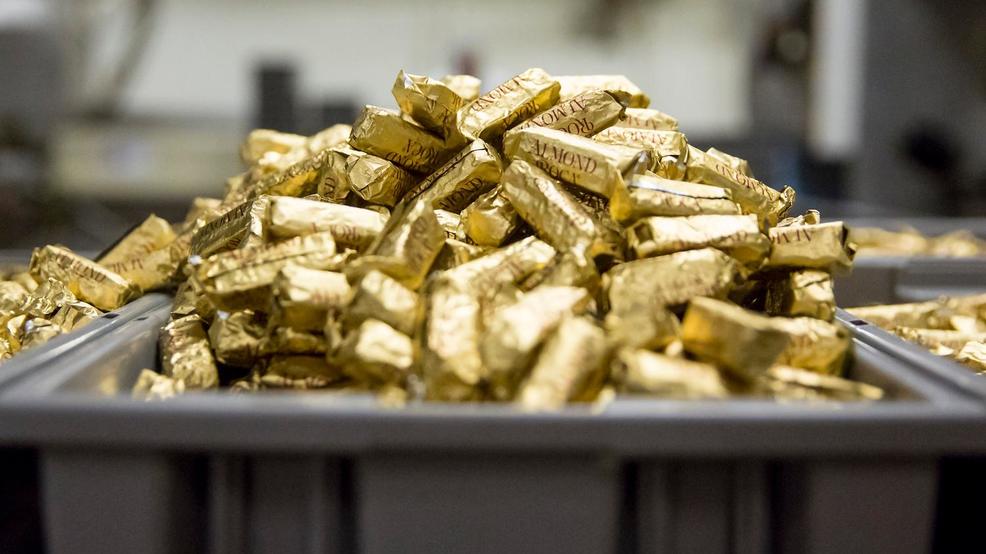 The signature gold foil of Almond Roca has been synonymous with rich decadent luxury worldwide, but did you know this quintessential candy is made right here in the Northwest. We took a tour of the Tacoma factory, where they're then shipped to 35 different countries! (Image: Sy Bean / Seattle Refined)
SEE MORE

You’re probably aware that Almond Roca is delicious, but there are likely a few things you don’t know about this sweet treat. Here are the secrets Seattle Refined friend Kent Phillips uncovered when he visited the Brown & Haley’s factory in.

1. The manufacturing process involves a guillotine

Don’t worry – everyone keeps their heads! The delicious almond butter crunch toffee is produced in long sheets that are cut into ribbons, which have to be cut into little logs before they can be coated with chocolate. A candy guillotine takes care of the cutting. As glorious as it would be to receive a lengthy ribbon of Roca, it’s much easier to eat in handy little logs pieces.

Brown & Haley was founded in 1914, and Almond Roca candy was invented in 1923. In 1927 the candy was first sold in its [now famous] signature pink tin to improve shelf life.

The new packaging allowed Almond Roca to travel easily and so, when WWII required troops to ship out overseas, Almond Roca was the candy that went with them. It also traveled with U.S. troops to Korea and Vietnam. Soldiers shared their sweets with locals who developed their own fondness for the candy, fueling exports and earning Almond Roca its reputation as “The candy that travels.”

3. Roca isn’t only about almonds

While Almond Roca is the best-known variety, those with affinities for other flavors can sate their cravings with Roca candy too. Brown & Haley also offers Cashew Roca, Mocha Roca, Dark Roca and several other varieties. Peppermint Roca is especially apt for the holiday season, whether you’re serving an after-dinner treat or offering a small token of gratitude to thank one of your holiday hosts.

Want to learn more? Want to buy delicious candy? Head to brown-haley.com where you can do both!